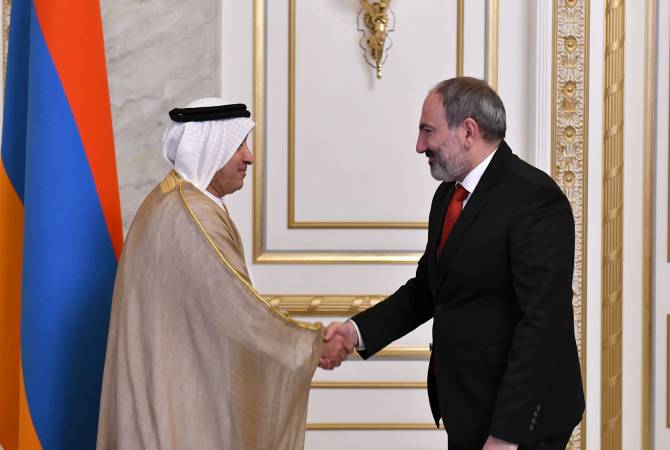 Congratulating the Ambassador on assuming his diplomatic mission in our country, the Premier wished him every success in his future activities. Nikol Pashinyan stressed the need for continued development of Armenia-UAE relations and expressed the hope that during his tenure the Ambassador would help upgrade the bilateral relations.

The head of the Armenian government noted that economic cooperation between the two countries has intensified recently, and there is a good opportunity to give new impetus to business ties. Nikol Pashinyan expressed satisfaction at the fact that Armenia and the United Arab Emirates are developing cooperation in tourism, which fosters contacts between the two peoples.

Thankful for the warm welcome, Mohamed AlZaabi expressed his willingness to make every effort on the way to expanding and deepening bilateral relations. The Ambassador said his country keen to develop cooperation with Armenia in energy, information technology, agriculture, tourism and other sectors. He advised that the possibility of launching a third direct flight between the two countries is being discussed at this point of time in an effort to boost tourism and trade turnover. The Ambassador noted that the UAE government is ready to discuss joint investment projects with Armenia.

The parties stressed the need to hold a meeting of the intergovernmental commission in the near future. Prime Minister Pashinyan expressed the hope that targeted decisions would be made during the meeting, aimed at expanding economic relations between the two countries. The Premier attached particular importance to the cooperation in the field of information technology and expressed the hope that UAE companies would take an active part in the World Information Technology Congress, due this fall in Yerevan.

In a bid to give fresh impetus to relations between Armenia and the UAE, both sides noted the importance of organizing business forums and reciprocated high-level visits.

Taking the opportunity, Nikol Pashinyan thanked the UAE government for their balanced position on the Nagorno-Karabakh conflict.