We knew for sure – they came to kill us: Ishkhan Trdatov survived the horror of the genocide in Sumgait 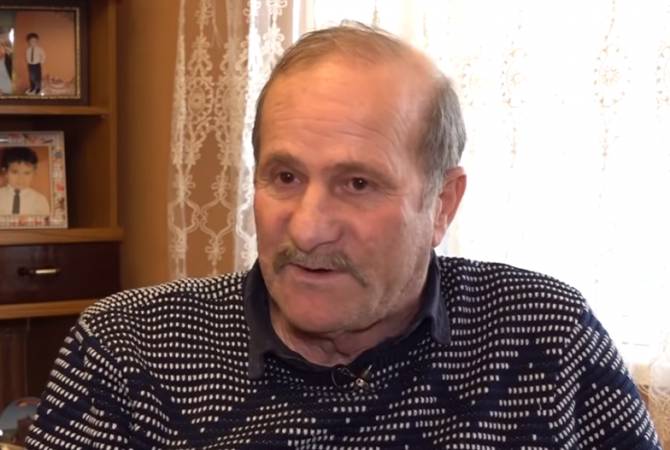 
Ishkhan Trdatov is one of the 18 thousand of Armenians who survived the horror of the genocide in Sumgait. Besides this, he is a true hero - someone who fought back against the members of the pogrom mobs along with his neighbors for more than 6 hours. They were able to protect their families, rescue their children. Despite this, what they have witnessed 31 years ago does not let go from them, fails to be forgotten…
Today Ishkhan presents the story to us the way it has happened...

“Before the events in the morning we, together with my wife and two sons, were going to my brothers’ at 2 o’clock in the afternoon. We were just leaving home, when Aydin’s wife, an Azerbaijani woman came to us: “I beg you, do not go Ishkhan. I know you and your wife very well. Do not go out of the neighborhood. If you do, they will kill you. They have already started to kill.

Everything started on the 27th, you know, I think Sumgait was targeted purposefully. The first attempt was planned to be in Kirovabad where an entire city block was inhabited by the Armenians and nothing could be done there, and when they came to Sumgait it was just what they wanted.

About 18 thousand Armenians lived there, but they all lived scattered; 2 or 3 Armenian families in one building. Before they broke into our entrance, they went to 5th flat right in front of our building. We saw what was going on there... They took Cherkez Grigoryan out of the house from the 1st flat, beat her, left her lying next to the entrance and went upstairs. That’s when I told my father to get an axe immediately. He was a carpenter but there were two axes at home.

When they walked into the entrance, we saw a crowd with an impressive number of people - they wouldn’t fit in the entrance all at once. There were about 200-300 people outdoors as well. They were also many children and teenagers from 12-14 years of age and even children. Most of them were natives - I could tell from the conversations.

Those who were not able to get to the entrance were throwing stones at the windows of all Armenian flats. I had never seen such kind of stones in our city and I assume it was brought beforehand. … There was an arbor in front of our house, and a free space, you could pass –that’s where they were spilling the stones brought from the production zone of Sumgait Pipe Rolling Plant.

What happened in the neighboring 4th, 5th and 6th flats was something terrible.
After that, they made it to our entrance. The first thing I heard was someone screaming that Armenians live in the 12th and 8th flats.
Our flat was the 6th and the 12th flat belonged to the Huseynovs. I had an instant thought - maybe we'll be lucky?

Me and my father beat the first attack back and made them ran off to the 1st floor. My wife Elmira threw a mix of pepper and salt into their eyes when they barged the 2nd time and it made them go back another time.

After some time our upstairs neighbors - Raffik Tovmasyan and his father-in-law Hrant Adamyan joined us. Thus we were already 4 men. By that time I was able move wife with children to the neighbor's house.
Every 20-25 minutes 2-3 people came upstairs in order to break into our flat. My dad, mom and I were able to hold them back together. Then they tried to squeeze through from our balconies. I can still totally picture the moment when I saw someone’s hand with an axe on the handrail. I hit him with the axe and he fell of screaming. I heard voices from the street saying I was a monster and that they will burn me alive but before that they will burn my children in front of me, rape my wife and burn me later. It was something horrible. Yes, and I say, get to me to start with…But in the end, of course, it was all horrible…

There was no doubt that they will kill us. Either we kill them, or they will. I had only one thought – I have to protect my family and that’s all.

Surprisingly our telephones were not turned off as it happened to most Armenians in Sumgait then. And we called wherever we could – both the police and the ambulance…“Flashes are all over the city, we cannot promise you anything. We will come as soon as we are free”, the police told us. I mean, they did not refuse directly, but it was clear that they will not come as I saw a few policemen through the window standing by the crowd. They were just standing and watching.

About 2-2.5 hours later I saw a few people going up again but this time leading naked woman in front of them. I recognized her – it was Sveta Grigoryan, Volodya Grigroyan’s wife. All her body was covered with traces of cigarette butts. They smoked the cigarettes and doused them on her body, do you get it? She came to our door and asked to let her in. I told her I can’t do it because if I do so, the ones following her will break into our house. She turned and went back. Then we heard her heart-rending screams from the street.

Then we heard some noise. My father told me they’re breaking over here through the wall. Thus they were not able to break into the entrance and the balcony but they had to think of something else, they had to get to us. Me and dad went to our bedroom, ripped the carpet on the wall and saw a hole at about 80 cm distances from the floor and suddenly a scrap popped out. But the wall was really solid and they did that little aperture for almost 1 hour. I think it was 20 x 40 in size.

Actually they were able to pull out a brick from the wall by that hole. I heard something gurgling and pouring into the flat. I couldn’t smell it as my nose was broken. My father ordered to go away from the wall and as soon as I moved they threw a match from the hole. Everything was burnt down – they poured petrol.

We had a bath full of water and my mom started pouring it out immediately. But I caught some fire. It harmed my face. I didn’t have any scars before. All of the scars are from Sumgait – 16 scars on my face, head and legs…

When the fire broke out they called the Fire department. Instead of helping us, they put the stairs on the wall pointing to the roof in order to get to us from the 5th floor. No one risked climbing – all of them knew that they’ll get hurt.

In the meantime I sent my mom to the neighbors. By 11pm it was just 4 of us, 4 men – me, Rafik Tovmasyan and Hrant Adamyan. There was no doubt – they wanted to kill us. They continued going up and down but couldn’t come up from the 2nd floor using the entrance doors to shelter behind and threw them at our staircase when running back.

I had about 40 liters of diesel oil in the balcony which I poured into everything they threw at the staircase and lit them up. This way we blocked their road. That’s the reason they called a fire truck…

At the same time they came up with ultimatums saying they have already burnt my neighbor from the 2nd floor and will do the same with me. Besides this, they told me they have burnt a young boy and killed his father and that all of this is waiting for me and my father. I figured it was Arthur Aramyan who was living on the 2nd floor.

What happened during these 6 hours cannot be described or be forgotten. I was all in blood. Then they started throwing bricks, the ones I mentioned before, at our windows. Those were not ordinary stones – they were mixed with an iron. One of those hit me on the face and broke my teeth literally breaking into 2 pieces. I fainted.

Regained consciousness and felt that the floor was wet. I’m lying face down, I remember, there were some blankets and mattresses above me. Wanted to stand up but couldn’t even move. No voices around me, no sound, just a deathly silence. I was trying to understand what was going on with me, maybe I was even dead. Then somehow I came out the matrasses and blankets and went straight to the 5th flat. I still had an axe in my hand. I hit the door with it a few times and shouted: “Shovkat, Shovkat”. That was the name of my neighbor.

It turns out Elmira, my wife, was there with children but did not hear anything. My neighbor had covered them under blankets and other clothes leaving them alone and they stayed there till the morning.

It was the night of the 28th of February. I went up to the 5th floor where my mom was hiding. The neighbor opened the door, looked at me surprised and asked, ““How is it, are you alive?”. She was a Talysh from Lenkoran. I said, “As you can see, I am”. She told me to drop the axe and come in. I followed her. She called the police. And she called the police. Here came the military and the police chief. I started yelling at them saying, “You, jerk, I'll get the axe and kill you!”.

The Colonel tried to calm me down and explained, “They gave us the order too late”. This means the military was in the city as well but didn't have any order to be involved in anything.

Both I and my mother were taken to the hospital. My mother was bandaged in the head in the hospital; from there she went to my brother barefoot. You know, what’s that, it was about 4 o’clock in the morning.

The neurosurgeon who operated on me told me that 20 years later I will realize the consequences these events had on me. Turned out he was right - it’s already 10 years that I have problems with my health.

Then I got to know that my father and Rafik were both killed - they were taken outside and murdered there. No one told me about it at first. My father’s head was severed by an axe. He died in the hospital, they say.

My uncle took my father from morgue. He then told me that he saw many bodies and most of them in a horrible state.

Our flat was burnt down, everything was stolen, was caused a damage of 28 thousand rubles but we did not receive a single penny despite the fact that I had the decision preceded by the USSR prosecutor’s office. Not like here, the Turks received all after the earthquake, all that they needed. But what was done with the Armenians, no one paid that money, didn’t even thought of it.

They initiated criminal proceedings but the trial didn’t take place. No one was punished.

They say time wounds heal. But that’s not true. It’s been more than 30 years now but I remember even the small details. Sometimes it seems like everything happened yesterday...