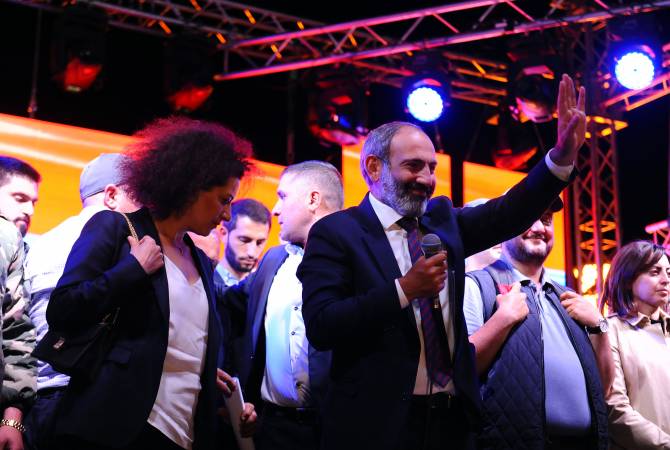 
YEREVAN, MAY 1, ARMENPRESS.  Following failing to elect a Prime Minister at the parliament of Armenia, Nikol Pashinyan headed to the Republican Square where thousands of protesters were waiting for him. He urged his followers to restore peaceful acts of civil disobedience starting from tomorrow morning.

“Our counter-move against the action of the Republican faction will be very rapid. Tomorrow total strike is declared. We block all the streets, communications, subway and the airports starting from 08:15. Our struggle cannot end in a failure”, Nikol Pashinyan said, addressing the protesters, adding that their struggle is “a peaceful civilian struggle with open hands”.

Referring to the debates at the National Assembly before the election of the PM, Pashinyan assessed them as provocative. “They wanted to achieve a point where the people and the candidate of the people would become nervous, take provocative actions, organize attacks but we are not engaged in acts of robbing the dead. The talks may refer only to the “political funeral” of the RPA”, ARMENPRESS reports Pashinyan as saying.

At the same time he noted that they have no option or opportunity to make a step back. Nikol Pashinyan also addressed the Police, urging them to join the people like MP Felix Tsolakyan did, who represents the ruling Republican Party, by voting in favor of Pashinyan.

The rally at the Republican Square ended without a march.