If Nikol Pashinyan finds it appropriate, we are ready to meet - Konstantin Zatulin 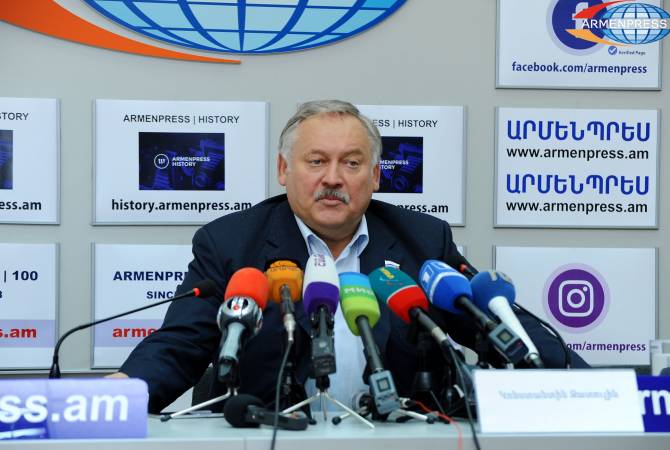 
YEREVAN, APRIL 28, ARMENPRESS. First Deputy Chairman of the State Duma Committee for CIS Affairs, Eurasian Integration and Relations with Compatriots, Head of the Institute of CIS Countries Konstantin Zatulin is ready to meet with the leader of “Civil Contract” party Nikol Pashinyan. Konstantin Zatulin said at a press conference at ARMENPRESS media hall that they have already held a number of meetings. They have meet with the leadership of the National Assembly of Armenia, Speaker Ara Babloyan and his colleagues. Today they met also with parliamentary factions.

“Personally I was to have an opportunity to meet with the representatives of “Yelk” bloc faction and and afterwards with Dashnaktsutyun. “Yelk” did not come with the staff we expected. About half an hour later Mr. Mirzoyan came, who gave a speech and answered our questions. He explained the absence of the others by the fact that they are insulted by the assessments of Mr. Ryzhkov. Personally I was not present during that unpleasant incident and do not know what’s the insult about. I am only pity for the representatives of the faction, who have announced about their leader becoming the Prime Minister, are so vulnerable and are not ready to communicate with us with the full staff”, Zatulin said. He underlined that they are ready to hold discussions over domestic political processes with everyone, including Nikol Pashinyan. Konstantin Zatulin noted that they know that Pashinyan is not in Yerevan and maybe for that reason he was unable to be present at the meeting and they understand it.

The reporters asked him to comment on the assessments of Nikolai Ryzhkov.

“I am not going to justify someone or apologize instead of someone else. I can say that Nikolai Ryzhkov is quite an honest figure who expresses his positions openly. He supposed an open conversation and spoke in the way he found necessary. The audience, you, we can assess whether he was right or not but I am not going to act here as a teacher and give Nikolai Ryzhkov lessons. By the way, if I am not mistaken this year he will become 90 and I would advise not to make an elephant out of a fly”, Konstantin Zatulin added.

He informed that he is going to meet with acting Prime Minister of Armenia Karen Karapetyan.

“I do not know Karen Karapetyan very well, but I know that he is well-known in Russia and he is a valued person. We want to express our support to Karen Karapetyan who faces a difficult problem. I don’t know if he will be nominated or no, there may be other candidates. But during the meeting with him I will talk to him about preventing new passions to the existing situation. We are interested that the issue should be solved in the legal framework, inside the parliament. Russia will attentively follow the developments”, the Russian parliamentarian said, adding that any attempt by any side to solve the situation by force we will not be accepted it unquestionably in Russia.