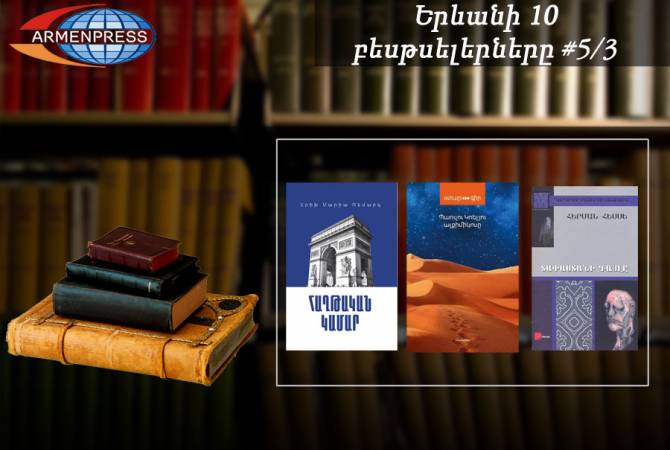 Armenian writer Edgar Harutyunyan’s ‘Unfound Chamomiles’ is second this week. This is the second book of the author. Unfound Chamomiles is about human relationship, love, friendship and betrayal.

Armen Niazyan’s ‘Hold my hand: I am afraid’ captures the 4th place. The book consists of three parts – stories, thoughts and poems the focus of which is the following: be careful towards human beings, not ignore them who need us.

Edgar Harutyunyan’s another book ‘Art of Devotion or Ode to Rose’ is 7th in this week’s list.

‘The Alchemist’ by Brazilian writer Paulo Coelho is 8th. Originally written in Portuguese, it became an international bestseller translated into some 70 languages as of 2016. An allegorical novel, The Alchemist follows a young Andalusian shepherd in his journey to Egypt, after having a recurring dream of finding treasure there.

‘Steppenwolf’ novel by German-Swiss author Hermann Hesse is next. Originally published in Germany in 1927, it was first translated into English in 1929. Combining autobiographical and psychoanalytic elements, the novel was named after the lonesome wolf of the steppes. The story in large part reflects a profound crisis in Hesse's spiritual world during the 1920s while memorably portraying the protagonist's split between his humanity and his wolf-like aggression and homelessness. Hesse would later assert that the book was largely misunderstood.

‘The Fault in Our Stars’ by John Green, published in January 2012, concludes this week’s top 10. The title is inspired by Act 1, Scene 2 of Shakespeare's play Julius Caesar, in which the nobleman Cassius says to Brutus: "The fault, dear Brutus, is not in our stars, / But in ourselves, that we are underlings."