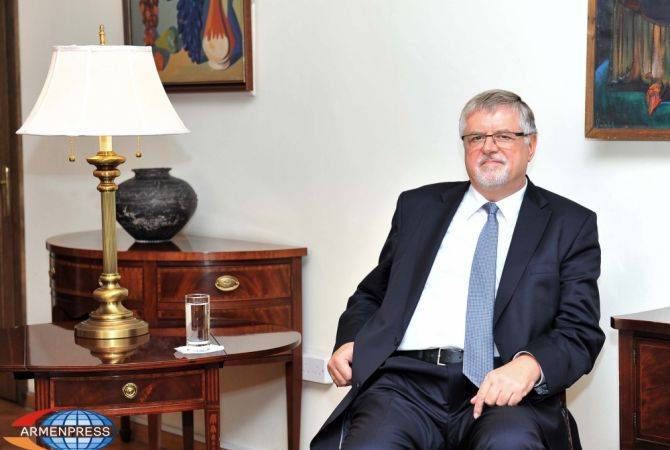 
YEREVAN, JULY 7, ARMENPRESS. Herbert Salber, the EU Special Representative for the South Caucasus and the crisis in Georgia, has arrived in Armenia on official visit.

During the meetings with Armenia’s high-ranking officials Armenia-EU relations and further cooperation development prospects, as well as the process of peaceful settlement of the Nagorno Karabakh conflict and the recent developments in the NK conflict zone were discussed.

Herbert Salber gave an interview to Armenpress over the recent escalation of the situation in the NK conflict zone.

-Mr. Salber , how would you assess the situation in the region and in Nagorno Karabakh in particular in view of the fact that Azerbaijan has been explicitly escalating the tension?

-Given the frequent ceasefire violations and casualties reported, we consider the situation around the Nagorno Karabakh conflict to be very volatile. Tragic incidents, like the most recent one that happened on July 4 and led to civilian casualties, are unacceptable. Violence must stop. This is a matter of serious concern, given the security risks that it entails for the region and the suffering for the people. The European Union has consistently been calling on the sides to strictly respect the ceasefire regime, avoid provocations and confrontational rhetoric, and engage in meaningful negotiations. There is a clear need to create an atmosphere of mutual trust to enable progress toward the desired political settlement at the earliest opportunity.

-The OSCE MG Co-Chairs were in Yerevan, Stepanakert and Baku and in this period Azerbaijan again violated the ceasefire, which resulted in human casualties. Recently the statements of the Co-Chairs had an "addressee" as not only does Azerbaijan violate the ceasefire, but also refuses to engage in negotiations and introduce investigation mechanisms. Don't you think that concrete actions should be taken to restrain the aggressor? What kind of restraint measures can the EU use to prevent aggression?

-The European Union has been urging the parties to the conflict to show restraint, stick to the ceasefire and pursue a political settlement. This is something I also always recall in my contacts with the leaderships here as well as in Baku. We also urged the sides to move forward on the implementation of the agreements reached by the Presidents of Armenia and Azerbaijan in Vienna and St. Petersburg last year. Expanding the OSCE Monitoring Mission and introducing an investigation mechanism could be useful instruments to establish the much needed trust between the sides. In parallel, engaging in exchanges and comprehensive negotiations to resolve the conflict on the basis of the OSCE Minsk Group Co-Chairs' proposals on the negotiation table would also be important. We fully support the efforts of the Co-Chairs in this regard.

-The AGBU Europe Office has launched a petition on change.org entitled "We Want Europe in Nagorno Karabakh". It called on the EU to implement social programs aimed at improving living conditions for local residents in Karabakh. Some MEPs, scientists, human rights campaigners, diplomats and others joined the petition. What is your opinion about such actions? Don't you think that NK people too like others deserve to have opportunities? What prospects do you see in the NK in terms of greater EU involvement?

-In addition to its political support for the Co-Chairs, the EU is complementing their efforts through its support for civil society peacebuilding activities. Already for several years, the EU has been funding an important people-to-people project entitled "The European Partnership for the Peaceful Settlement of the conflict over Nagorno Karabakh" ("EPNK"). It is geared towards conflict transformation and peace-building. Through this project, which has recently entered its third phase, we aim at creating and maintaining contacts and exchanges between civil society actors across the conflict divide. As such, it also involves civil society participants from Nagorno Karabakh. EU's further involvement is contingent on progress in the conflict settlement and agreements reached in the course of this process spearheaded by the OSCE Minsk Group and its Co-Chairs. Once a peace settlement is reached, the EU will of course be ready to contribute to its implementation.