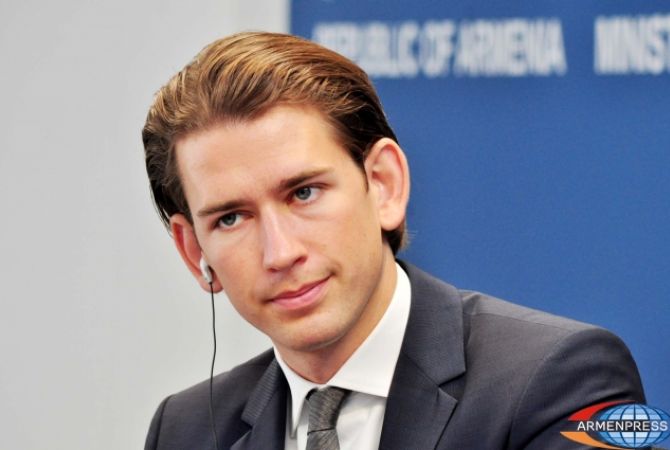 He said all parties involved in the conflict should do their utmost to cooperate, establish trust and dialogue, and to focus on diplomacy rather than military action since their repetition can be fatal.

-Austria will assume the OSCE chairmanship starting January, 2017. What will be the priorities of Austria’s chairmanship in the OSCE?

-I am a member of a generation that luckily only knows the Cold War from history books. But these days we observe some tendencies for a re-emergence of Cold War-like animosities, so we – and this certainly counts for young people in Austria as well as the Caucasus alike – should work hard for a secure and stable Europe. During our Chairmanship, our main theme will be “enhancing security and trust”. The focus will be on three areas: regional conflicts, radicalization and violent extremism and re-establishment of trust. Nothing shows the weakness of the international system like open military hostilities and regional conflicts. Citizens expect us to work for peace, and so we will dedicate special attention to the existing protracted conflicts in the OSCE region. Radicalization and violent extremism are furthermore of greatest concern to all our citizens, and we believe we need to actively counter and prevent radicalization at an early stage. And finally, today, one of the key problems is the lack of trust. This is of serious concern within the OSCE, but of course also on a wider level.

-As you can see we have transformed those main threats into our main priorities during the OSCE Chairmanship – following consultations with our partners. Austria, as a neutral country, enjoys good relations with many countries, and in particular the 56 other participating States in the OSCE – an organization that we truly believe in and want to see strengthened. In order to make Europe safer again, we have to go back to the roots and focus on security and cooperation. The OSCE is the prime framework for this and in the current situation, with all 57 participating States at the table and decisions being taken in consensus, challenges are huge. But, if joint solutions and agreements are found, they will be particularly strong and firm. We will, therefore, work to develop shared objectives rather than on divisive positions. Austria has a long tradition as a place for dialogue, and we want to contribute to overcoming mistrust. There are a number of concrete events planned and we hope for the support of all other OSCE participating States in this endeavour. Getting closer to finishing the puzzle of increased trust and cooperation in the global order, will have a positive impact on protracted conflicts in the South Caucasus as well.

-As acting Chairman of the OSCE, what prospects do you see for the settlement of the Nagorno Karabakh conflict?

-One thing is for sure: There exists no military solution to this conflict, and all parties involved should do their utmost to cooperate, establish trust and dialogue, and to focus on diplomacy rather than military action. Another outbreak of violence would be fatal and the international community is not in favor of that, everyone – from Moscow to Washington – is clear on this issue. A number of proposals to help establish peace have been on the table for some time already, and a few ideas for confidence-building measures have been established more recently that are awaiting their implementation.

-Will you have any separate initiative, which might boost the negotiations over the Nagorno Karabakh conflict settlement?

-Austria stands ready to support Armenians and Azerbaijanis in their search for a peaceful solution to this conflict. It is probably too early to speak about concrete initiatives – a lot will depend on the developments in the region. Vienna was the venue for the Presidential summit in May this year, and we are always happy to host negotiations again if the wish exists. We are not members of the Minsk Group, but we will do our best to support the Minsk Process. We will do so as OSCE Chair and as a State that has very good relations with both concerned countries.

-When are you planning to visit the South Caucasus region?

-I will for sure visit the South Caucasus and come to Yerevan and Baku in my function as Chairperson-in-Office of the OSCE. Ideally, that would be linked to progress in the negotiations. In 2017, Austria will also celebrate 25 years of diplomatic relations with both countries, which is an additional incentive to intensify diplomatic relations next year.

-How would you assess the current level of the Armenian-Austrian relations? How do you assess the political dialogue, what are the prospects in terms of boosting economic ties?

-The bilateral relations between Austria and Armenia are excellent. We have regular political consultations – my last such bilateral meeting with Minister Nalbandian took place in the margins of the UN General Assembly in September and only a few days later our Secretary General had extensive consultations in Yerevan. Austria is fully supportive of closest possible relations between Armenia and the European Union and therefore we are very pleased with the progress, which has already been achieved in the negotiations for a Comprehensive Agreement. We have also a full cultural cooperation, on the Austrian side especially through “Austrian Library Franz Werfel Yerevan”. Armenia is also a priority country of the Austrian development cooperation. Therefore, in September 2014, Minister Nalbandian and I myself inaugurated the office of the Austrian Development Agency (ADA) in Yerevan.