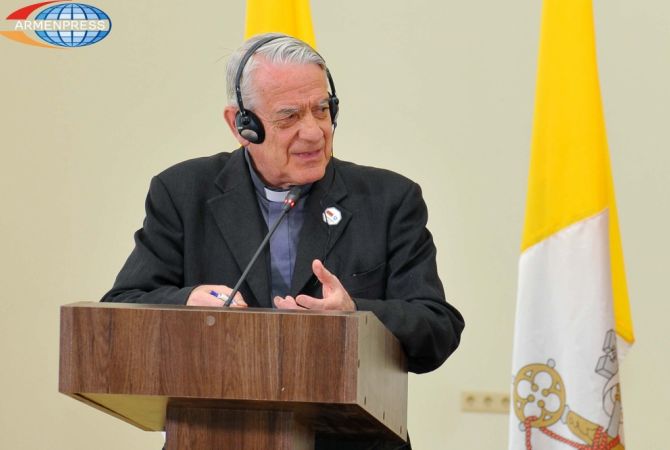 
YEREVAN, JUNE 26, ARMENPRESS. Director of the Vatican Press Office Federico Lombardi, referring to official Ankara’s announcement on Pope Francis’ use of the ‘genocide’ word, said Pope Francis speaks about building bridges for dialogue and peace. If someone is carefully listening and reading what he says, he/she will find nothing there to elaborate his words as “spirit of the Crusades”.

“I can urge to clearly read and understand what the Pope said and wrote. I understand there are different impressions on the problems and tension, however, what the Pope said is directed towards creating grounds between the people. He prayed for this. He didn’t say anything against the Turkish people, he spoke about the reconciliation of the Armenian people and Turks”, Lombardi said.

Moreover, Lombardi urged to avoid using “the spirit of the Crusades” expression and said “Pope has never been on a Crusade, he tries to build peace rather than to wage war”.

Earlier “Hurriyet” reported that Turkish Deputy Prime Minister Nurettin Canikli called the Papal announcement “a great tragedy”. He said it bears traces of “the mentality of the Crusades.” “It is not an objective statement that conforms with reality,” Nurettin Canlikli said.

Pope Francis delivered a speech in a meeting with President of Armenia Serzh Sargsyan, authorities, and diplomatic corps on June 24 in Yerevan. In his speech he deviated from the in-advance prepared text of the speech provided to media representatives and used the word “Genocide”.