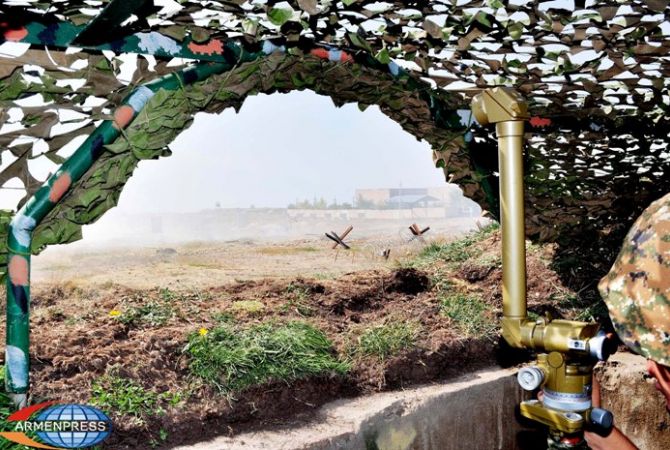 
YEREVAN, MAY 14, ARMENPRESS. The statements of the Azerbaijani authorities that the Armenian side  used  chemical weapons against Azerbaijan, are absurd and are meant to hide direct military atrocities against Armenia and the Armenian armed forces.

“Armenpress” reports, statements with respect to white phosphorus  which were presented to military attaché at the forefront as evidence of use of chemical weapons ( by the way the presented proof was just caused by the explosion of an artillery shell), was a primitive drama, one and only aim of which was to find  another absurd accusation against the Armenian side. Videos released by the Azerbaijani side did not prove that the hole was caused by the firing from the Armenian side. Throughout April days the Azerbaijani soldiers were simply «gleaming» with precise strikes, so they could simply miss and then propel another scandal against the Armenians.  Besides, Azerbaijanis staging white phosphorous drama forgot about some most important issues. First of all white phosphorus is not a chemical weapon,it is used as an igniter for explosives  and  is widely practiced in big buildings as a means of combustion for technical buildups. White phosphorus is not included in the list of chemical weapons and does not apply to an open area. This information can be found in any books on chemistry or disarmament.  The use of white phosphorus  is ineffective  in deserted area. Meanwhile, Azerbaijanis found the shell in the open field, where there was no target. Therefore, this is a staged performance.

As for the Azerbaijani armed forces, it should be noted that during the four-day war in April Azerbaijanis used grenade smoke shells against the Armenian forces. The availability of chemical mixtures generate visual and respiratory irritation for the military staff. In large doses it causes heart infection and respiratory paralysis.