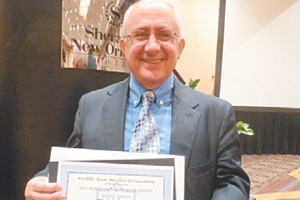 At the course of the award giving ceremony the MESA commission announced: "This is the strongest historical thesis dedicated to the Armenian Genocide ever and this is a very influential scientific work."

Taner Akçam was born in Ardahan, Turkey, October 23, 1953. He is a German historian and sociologist. He is one of the first Turkish academics to acknowledge and openly discuss the Armenian Genocide, and is recognized as a "leading international authority" on the subject.

In August 1988 Akçam began work as a research scientist at the Hamburg Foundation for the Advancement of Research and Culture. He received his PhD from the University of Hanover with a dissertation titled, Turkish Nationalism and the Armenian Genocide: On the Background of the Military Tribunals in Istanbul between 1919 and 1922. Akçam is a former student of fellow genocide scholar, Vahakn Dadrian. In 1997, a Dutch documentary titled "Een Muur van Stilte" (A Wall of Silence), written and directed by Dorothée Forma of the Humanist Broadcasting Foundation (Dutch: Humanistische Omroep Stichting), was made about their "academic relationship."

Akçam was Visiting Associate Professor of History at the University of Minnesota, United States before joining Clark University's Strassler Family Center for Holocaust and Genocide Studies.