Candidates Tournament to launch in London 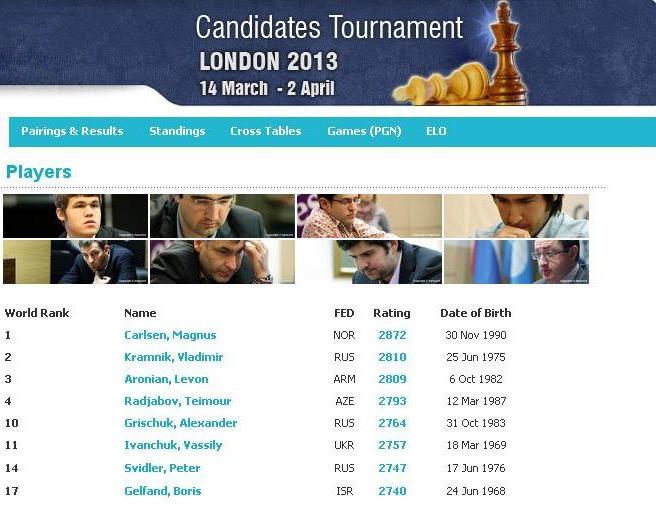 
YEREVAN, MARCH 15, ARMENPRESS. The FIDE Candidates Tournament launches in London. World's eight strongest chess players will compete with each other from March 15 to April 1. This is the final contest to determine the challenger for the World Chess Championship. The winner of the Candidates Tournament will earn the right to a match for the World Championship against the incumbent World Champion Viswanathan Anand.

Magnus Carlsen - Magnus Carlsen was born on 30 November, 1990. He is a Norwegian chess grandmaster and former chess prodigy who is the No. 1 ranked player in the world. His peak rating is 2872, the highest in history. Carlsen was the 2009 World Blitz chess champion. On 26 April 2004, Carlsen became a Grandmaster at the age of 13 years, 148 days, making him at that time the second youngest Grandmaster in history, although he has since become the third youngest. On the November 2009 FIDE rating list, Carlsen had an Elo rating of 2801, becoming the fifth player to achieve a rating over 2800. On the January 2013 FIDE rating list, Carlsen reached an Elo rating of 2861, thus surpassing Garry Kasparov's rating record of 2851 (set in July 1999). Based on several of his FIDE rankings, Carlsen qualified for the Candidates Tournament that will determine the challenger to World Champion Viswanathan Anand in the World Chess Championship 2013. He previously qualified for the 2011 Candidates Tournament, but withdrew.

Boris Gelfand - Boris Gelfand was born on 24 June, 1968. Gelfand is an Israeli chess Grandmaster. He won the 2011 Candidates Tournament and faced World Champion Viswanathan Anand for the World Chess Championship 2012. Although the match was level at 6–6, Gelfand lost in the rapid tie break games.

Vassily Ivanchuk - Vasyl Mykhaylovych Ivanchuk was born on March 18, 1969 in Kopychyntsi, Ukraine. Ivanchuk has been a leading player in the world since 1988, ranking as high as No. 2 on the official FIDE Elo rating list (July 1991, July 1992, October 2007) and No. 1 briefly on the unofficial live rating updates from September 10–12, 2008. Ivanchuk often has erratic results, dropping as low as 30th in July 2009 before returning to the top ten in the next list. Ivanchuk was the 2007–2008 World Blitz Chess champion,[5] and won the Amber blindfold and rapid chess championship in 1992 and 2010. In 2011, by the decree of the President of Ukraine, Ivanchuk was awarded the Order of Prince Yaroslav the Wise IV degree.

Alexander Grischuk - Alexander Igorevich Grischuk was born on October 31, 1983. He is a Russian chess grandmaster and Russian Champion in 2009. He has won two team gold medals and one individual bronze medal at Chess Olympiads.

Peter Svidler - Peter Svidler was born on June 17, 1976. Peter is a Russian chess Grandmaster. He is six-time Russian champion (1994, 1995, 1997, 2003, 2008, 2011). He placed shared second (together with Viswanathan Anand) in the FIDE World Chess Championship 2005 with 8½ points out of 14 games, finishing 1½ points behind the winner, Veselin Topalov. In the World Chess Championship 2007, he placed 5th among the eight players. He has won five team gold medals and one individual bronze medal at Chess Olympiads.