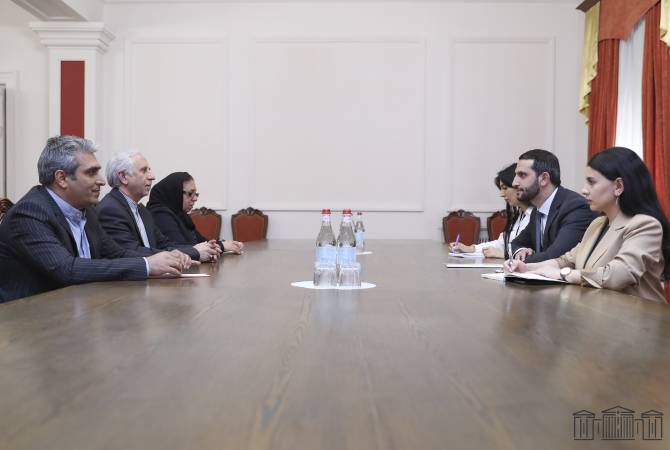 
YEREVAN, MAY 20, ARMENPRESS. Vice President of the National Assembly of Armenia Ruben Rubinyan received Ambassador Extraordinary and Plenipotentiary of the Islamic Republic of Iran to Armenia Abbas Badakhshan Zohouri on May 20.

As ARMENPRESS was informed from the National Assembly, welcoming the Ambassador, Ruben Rubinyan noted that the two countries have a high level of relations based on both historical and existing realities.

The Vice President of the National Assembly emphasized that the inter-parliamentary cooperation is of special importance for strengthening the bases of the mutually beneficial bilateral cooperation, to which the mutual visits give a qualitatively new level.

Ambassador Abbas Badakhshan Zohuri, emphasizing the centuries-old history of Armenian-Iranian relations, noted that they should be developed, including in the inter-parliamentary platforms.

Highlighting the centuries-old Armenian-Iranian relations, Ambassador Abbas Badakhshan Zohouri noted that they need to be developed, including at parliamentary platforms. The Ambassador emphasized the need for cooperation between the Committees of the two parliaments.

At the request of the Ambassador, Ruben Rubinyan presented details on the process of normalization of Armenia-Turkey relations, emphasizing the positions and priorities of the Republic of Armenia.

The Vice President of the parliament highly assessed Iran's position on the territorial integrity of Armenia and the inviolability of its borders.

The parties also referred to the importance of the construction of the "North-South" highway.