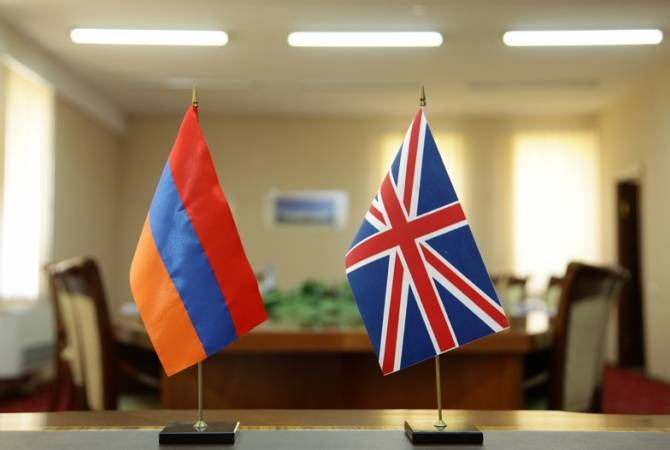 
YEREVAN, JANUARY 20, ARMENPRESS. Today, on January 20, the Republic of Armenia and the United Kingdom of Great Britain and Northern Ireland are marking the 30th anniversary of establishment of diplomatic relations.

The diplomatic ties between the two countries were established on January 20, 1992.

The Armenian-British ties, however, have far deeper roots and aren’t limited to the 30-year history of the newly independent Armenia. For example in 1918-1920, when the First Republic of Armenia was an ally of the Anglo-French-led Entente which won in WWI, while Britain gained dominating positions in the entire region.

Armenia and the UK restored interstate friendly relations after the collapse of the Soviet Union in 1991, when Armenia re-gained independence. The UK formally recognized the Republic of Armenia on December 31, 1991.

Armenia opened its embassy in the UK – its first embassy in Europe - in 1992. The first Armenian Ambassador to the UK was H.E. Armen Sarkissian, the current President of Armenia, and he served three terms, most recently from 2013 until his election as president in 2018. The current Armenian Ambassador to the United Kingdom is H.E. Varuzhan Nersesyan.

The United Kingdom opened its embassy in Armenia in 1995, with H.E. David Miller serving as the first resident Ambassador. The current British Ambassador to Armenia is H.E. John Gallagher.

The two countries have signed 6 agreements on encouraging and protecting investments and cooperation in education, science and culture, air connection and other sectors. Several memorandums are also signed, including on unrestricted travel. Notably, the UK is carrying out its Chevening program in Armenia, thanks to which many Armenian young people gained higher education and continue learning in the UK’s best universities.

Armenia and the UK are cooperating also in the defense sector. Every year, the defense ministries of both countries hold military-political consultations and confirm yearly cooperation plans.

The bilateral trade volumes are not high, but a positive growth dynamics is being observed recently. According to the Armenian foreign ministry, in 2020 it totaled only 64,5 million dollars.