As the CSTO presiding country, Armenia played a key role in making all the document-related decisions: Shoygu to Putin 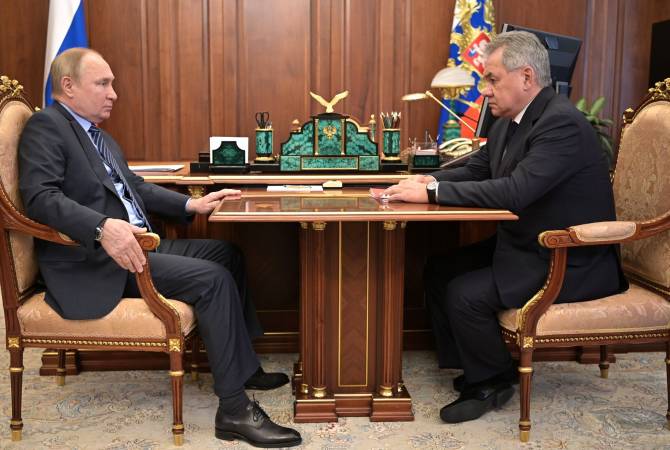 
YEREVAN, JANUARY 13, ARMENPRESS. Russian President Vladimir Putin held a working meeting with the Russian Defense Minister Sergei Shoygu, during which the Minister presented the activities of the CSTO peacekeeping force in Kazakhstan, ARMENPRESS reports, citing the official website of the Kremlin, Shoygu stressed that Armenia, as the CSTO presiding country, should have played a key role in making all the document-related decisions and it did it.

In due time and in a very short period, the CSTO peacekeeping forces were deployed in Kazakhstan, taking control of 14 objects of special importance.

"Those are objects responsible for ensuring communication, energy, state vitality and efficiency. At the request of the Kazakh leadership and on your instructions, a number of facilities have been taken under control, which would pose a serious threat if the terrorists took control of them," Shoygu said.

"We have confirmed the decision to withdraw troops step by step and hand over the objects to Kazakhstan. Withdrawal starts today. Tomorrow we will withdraw the peacekeeping forces of our partners - Armenia, Tajikistan and Belarus - by 14 planes. It is planned to complete all the work on January 19," he added.

Vladimir Putin noted that the CSTO peacekeeping forces have played a very important role in stabilizing the situation in Kazakhstan.

"It is very important that the situation was resolved with the help of the CSTO. This was, in fact, the first such operation by the CSTO forces. With joint efforts we solved a very important problem. We were able to quickly concentrate all the necessary forces and resources. Everything worked like a clock: fast, organized and efficient," he added.