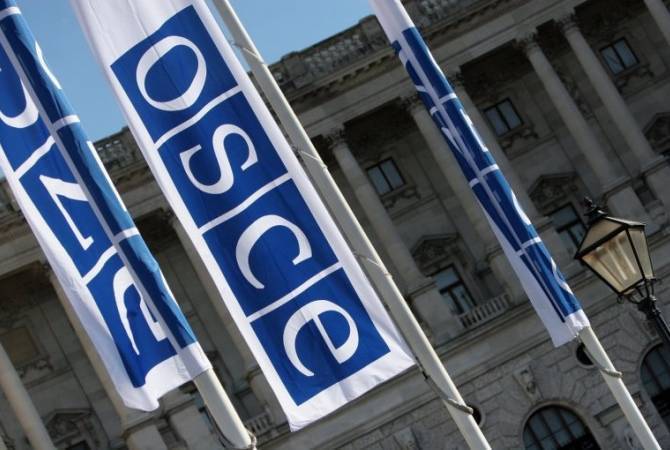 
YEREVAN, DECEMBER 7, ARMENPRESS. The Nagorno Karabakh conflict has been discussed on the sidelines of the 28th OSCE Ministerial Council, which was held in Stockholm, Sweden, on December 2-3.

It can be recorded that contrary to the statements made by the top leadership of Azerbaijan that the Nagorno Karabakh conflict is over, the statements made by the representatives of different countries and international organizations within the frames of the Ministerial Council come to prove that the issue of the settlement of the conflict is still relevant for the international community, as well as to reaffirm that the NK conflict settlement is viewed in the OSCE Minsk Group Co-Chairmanship format and under its mandate through peaceful negotiations.

Ann Linde, the OSCE Chairperson-in-Office and Minister of Foreign Affairs of Sweden, said in her remarks: “In the context of the Nagorno Karabakh conflict there are unresolved issues which were demonstrated also by the resumption of hostilities in the region last month. The OSCE plays a vital role in the region, and we all must provide full support to the OSCE Minsk Group Co-Chairs and the Personal Representative of the OSCE Chairperson-in-Office during and after this ministerial council”.

In his turn US Secretary of State Anthony Blinken welcomed the resumption of direct dialogue between Armenia and Azerbaijan. “We urge them to make progress on humanitarian issues including detainees, demining, missing persons, with investigations of alleged human rights abuses and violations of international humanitarian law with the perpetrators held accountable.  And I hope there, we can all work together including with Russia to continue to make progress. We urge all parties to resolve other outstanding issues like border delimitation and demarcation, the restoration of economic and transport links, and to continue to engage with the Minsk Group co-chairs for a lasting peaceful end to the Nagorno Karabakh conflict”, he said.

Russian Foreign Minister Sergei Lavrov in his speech highlighted the role of the OSCE in the conflict’s settlement process.

Head of the French delegation at the 28th OSCE Ministerial Council Franck Riester also welcomed the resumption of dialogue between Armenia and Azerbaijan under the mandate of the OSCE Minsk Group Co-Chairmanship. “We call on the sides to agree on taking such actions under the auspices of the Minsk Group, which would reduce tension and contribute to creation of a respective environment for progress in other areas for the benefit of peoples. We reaffirme our trust to the work to be done by the Co-Chairmanship with the sides. We call on to remain committed to the agreements reached by the November 9 statement”, Franck Riester said.

President of the OSCE Parliamentary Assembly Margareta Cederfelt called on Armenia and Azerbaijan to achieve peace. “Border clashes between troops from Armenia and Azerbaijan have resumed one year after a deadly conflict. I will kindly ask the parties to get together and agree for a long, lasting peace”, she said.

A number of other top officials also touched upon in their speeches the current situation in the Nagorno Karabakh zone, expressing their support to the efforts aimed at the lasting solution of the conflict. All in their speech highlighted the return of prisoners of war and other persons held as a priority issue requiring urgent solution.

In its statement the European Union also made a reference to the necessity of the final settlement of the Karabakh conflict. “The European Union supports and is ready to complement the efforts of the OSCE Minsk Group towards a negotiated, comprehensive and sustainable settlement”, the statement says.

The “Quint” (Albania, Sweden, Poland and North Macedonia) statement also made a reference to the NK conflict, calling for taking additional measures for the de-escalation of the situation and resumption of substantive negotiations.

In fact, the 28th OSCE Ministerial Council showed that there are two contradictory approaches over the NK conflict: on the one hand, the positions of Armenia and the international community mostly match, and on the other hand, Azerbaijan’s attempts to present the developments caused by the use of force as a base for the solution of the situation, its made-up visions and propaganda, have not been “encouraged” by the international community.

Perhaps, this is the reason that the Azerbaijani side avoided the meeting with the Armenian Foreign Minister under the auspices of the OSCE Minsk Group Co-Chairs planned in Stockholm.

Truly, after the statements of both the representatives of the Co-Chair countries and other member states of the OSCE, this meeting everywhere would have been viewed in the context of moving forward the peace process for the settlement of the NK conflict, not in the context of solving the so-called “post-conflict” issues between Armenia and Azerbaijan, like the Azerbaijani side was trying to present to its public the meetings held in New York and Paris.

It’s worth noting that at the end of the Ministerial Council, the OSCE Minsk Group Co-Chair made a statement, noting that although they held separate meetings with the Armenian and Azerbaijani foreign ministers, a joint meeting under their auspices didn’t take place.

“They express their readiness to host such a meeting as soon as circumstances allow to continue discussions begun in New York in September and in Paris in November”, the statement says.