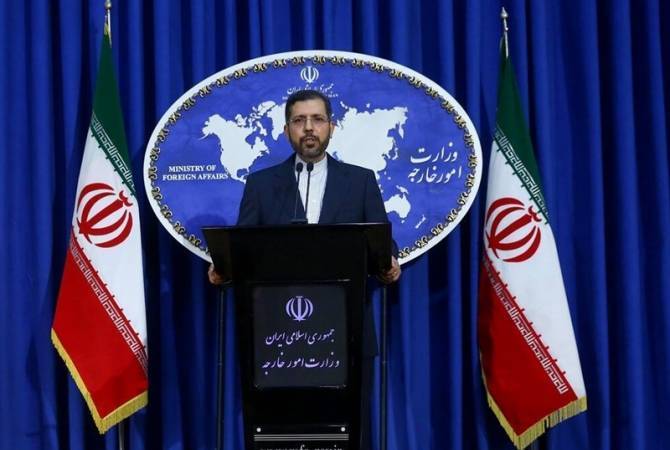 
YEREVAN, SEPTEMBER 28, ARMENPRESS. Iran’s Foreign Ministry Spokesman Saeed Khatibzadeh said on Tuesday that the military drill held in northwest of Iran was a sovereignty issue and the Islamic Republic of Iran wouldn’t tolerate the presence of the Israeli regime near its borders, ARMENPRESS reports, citing IRNA.

Asked about the statements made by Azerbaijan Republic President concerning Iran’s military exercise held in the northwest of the country, the spokesman said that the way the Azerbaijani President has expressed the remarks was surprising, as the two countries have good, respectful relations and enjoy normal paths of communication at the highest levels.

Khatibzadeh said that foreign ministers of Iran and Azerbaijan Republic have seriously and closely discussed this issue and other subjects in a meeting on the sidelines of the United National General Assembly in New York.

The top diplomats have agreed to continue the talks in a proper ground, according to the spokesman.

The Islamic Republic of Iran has always rejected any type of territorial occupation and emphasized the necessity of respecting territorial integrity of countries and internationally recognized borders, Khatibzadeh went on to say.

Observing the principle of good neighborliness is among the most important topics the Iran expects its neighbors to consider, he stressed.

The diplomat also explained that the military exercise in the northwest regions of Iran was a sovereign issue and was aimed at securing peace and stability in the region.

The Islamic Republic of Iran wouldn’t tolerate the presence of the Israeli regime, although exhibitive, near the borders of Iran and would do whatever it deems necessary for its security.