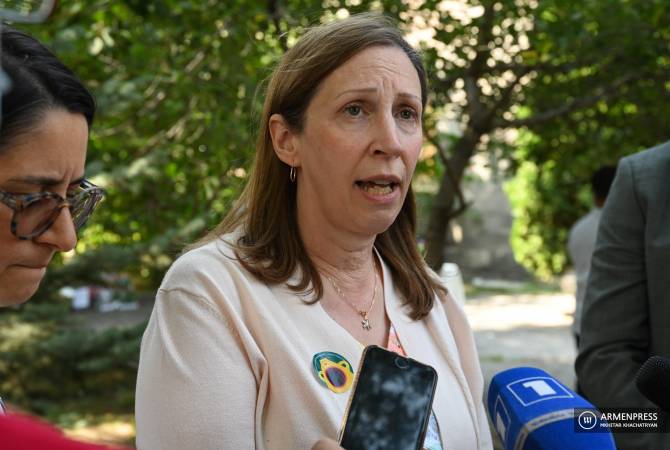 
YEREVAN, AUGUST 23, ARMENPRESS. US Ambassador to Armenia Lynne Tracy says the consequences of the recent war in Nagorno Karabakh have not been overcome, the conflict has not been resolved because the status of Nagorno Karabakh remains to be decided.

“We will continue to work through our position as an OSCE Minsk Group Co-Chair to work towards that goal of bringing down violence, of de-escalation so that we can get to some of the other very critical issues that need to be discussed”, she told reporters in Syunik province.

Commenting on security issues and border incidents, the Ambassador said she has already spoken on these issues, as well as the State Department has also spoken from Washington on these issues on several occasions. “I think you may also know that in July I visited Gegharkunik and one of these border areas where there have been tensions and violence. Let me just make very clear: we are calling for de-escalation and a separation of forces to try to bring down the violence”, the Ambassador said.

The US Ambassador noted that the solution of these issues is very important because civilians appear in the middle of the conflict and are being affected in terms of their safety and security in their own homes. “This is why there is such urgency in addressing these issues”, she added.