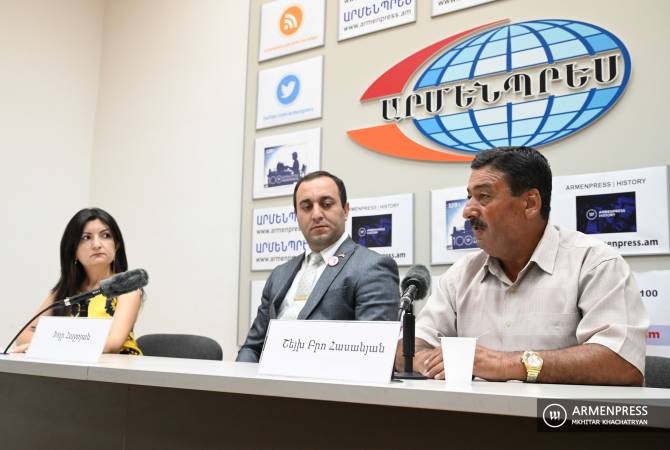 
YEREVAN, AUGUST 10, ARMENPRESS. The Yazidis will submit to international court the issue of genocide committed by terror groups against Yazidis in Sinjar in 2014.

The Yazidi National Union president Khdr Hajoyan said at a news conference that a fact finding mission is carried out for many years in cooperation with lawyers and European partners in order to present all details regarding the Yazidi genocide.

“An entire nation was subjected to genocide in 2014 in Sinjar. Mass murders, a crime which took place before our eyes in the 21st century. Over 400,000 Yazidis became refugees, Yazidi children were kidnapped, women were raped,” Hajoyan said.

He reminded that the United States reacted at that time and delivered air strikes at Islamic State militants.

The Yazidi genocide has been recognized by several international organizations and countries, including Armenia. The Yazidi community will continue the process of the genocide recognition. By applying to international court, the Yazidis seek to not only achieve a condemnation of the genocide but also for steps to be taken to identify the perpetrators of crimes and hold them to account.

“I am addressing the international community with a call – we must see actions truly preventing genocides. Yes, the Armenian Genocide was not condemned in time and we saw new genocides before our eyes.”

After the Yazidi genocide, survivors and refugees live in temporary camps in Syria and Iraq. The spiritual leader of the Yazidis in Armenia Sheikh Bro Hasanyan says the situation there is concerning. A recent fire which broke out in one of these camps underscored this. Humanitarian issues range from security, epidemiological situation, unfavorable conditions and food insecurity.

“Today, the return of Yazidis to their settlement is hindered, and Turkey’s signature is present here. We believe this is planned. International organizations demand to ensure a concrete number of Yazidis there, which will be the basis for the process of getting a legal status. And in order for this not to happen, with different actions Turkey is forming an atmosphere of fear so that Yazidis don’t return to Sinjar,” Hasanyan said.

Aside from achieving condemnation of the genocide and bringing to account the perpetrators, by applying to international court the Yazidis expect to achieve a status of autonomy for Sinjar or the creation of a security zone in that part. The Yazidis also want to have representatives at international organizations.