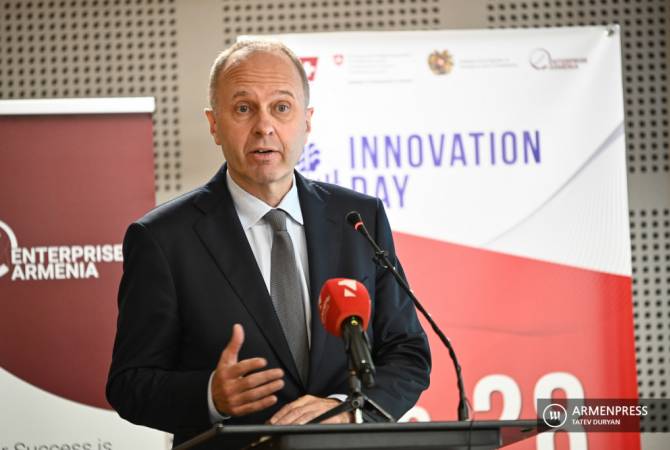 
YEREVAN, JULY 26, ARMENPRESS. Ambassador of Switzerland to Armenia Stefano Lazzarotto has commented on the prospects of the Armenian-Swiss business ties, stating that there is a big potential and calling on the Armenian companies to use their tools to expand their presence in Switzerland.

“Swiss-Armenian relations are quite expanded in different directions. Economic relations are one of the most developed components of our cooperation. Moreover, we are cooperating quite actively with the government of Armenia in the field of governance, focusing especially on reforms in import, agriculture and economic development directions. But, of course, in addition to the economic sector, we cooperate also in a number of other areas. We have very strong ties in the field of culture and also cooperate in education area. In addition, Switzerland is Armenia’s one of main partners in international cooperation field”, the Ambassador said on the sidelines of the Innovation Day conference in Yerevan, adding that Switzerland is currently implementing different programs in Armenia’s southern and northern regions, assisting in the creation of added value and jobs in the country.

Among the active fields of the Armenian-Swiss cooperation are also the IT, pharmaceutics, mining industry, etc.

As for the commercial relations and investments, the Ambassador stated that both this conference and the GSP system of Switzerland, which is now not fully used by Armenia, are very good tools for the Armenian companies to expand their presence in Switzerland.

The Ambassador assures that the Swiss companies in turn are interested in making investments in Armenia. According to him, the Armenian-Swiss business ties have huge development potential.

“If that potential didn’t exist, we would not have been here today. I think that the potential is very big. At the moment one of the main challenges is the pandemic, as well as adapting our tools to this new situation. We need to be creative as much as possible. Several projects have already been approved”, Stefano Lazzarotto said.