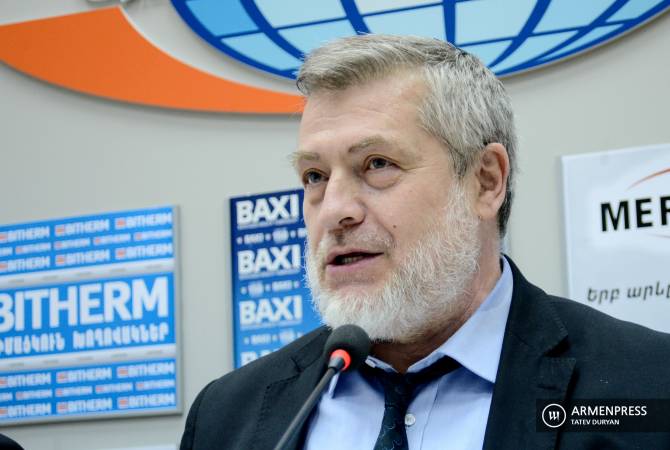 
YEREVAN, JULY 20, ARMENPRESS. Israeli publicist and public figure Avigdor Eskin, who visited both Armenia, Azerbaijan and Artsakh for many times, says not only Armenia, but also Azerbaijan need a peaceful and long-term normalization of the relations.

Mr. Eskin told ARMENPRESS that today’s status of Azerbaijan in the world greatly depends on its readiness to sign a peace agreement with Armenia. In this context he called on Azerbaijani President Ilham Aliyev to refuse from militaristic rhetoric against Armenia, stating that it obstructs the negotiations.

“Aliyev understands very well that today the status of Azerbaijan in the world significantly depends on his readiness to go to a long-term, peace agreement with Armenia. Azerbaijan’s close ties with Turkey and domestic situation are seriously criticized by the whole world. These are not only the forces which are in conflict with Azerbaijan. Firstly, the talk is about the Soros organizations, with which Aliyev is in war for already several years, and also the US Administration and the European Union which criticize Azerbaijan. Therefore, it would be better if your neighbors understood that the steps aimed at the peaceful, lasting settlement are necessary not only for Armenia but also Azerbaijan”, the Israeli publicist said, adding that the peaceful settlement is beneficial to all both in economic and other terms.

Avigdor Eskin commented on Aliyev’s statements about Zangezur, Sevan and Yerevan, calling such rhetoric a wrong step by the Azerbaijani leader.

“If it’s a policy, it’s a wrong policy which has no opportunity to be fulfilled. If it’s rhetoric, it’s worth refusing because it provokes a new dispute, creating natural concerns in Armenia. What does it mean “Azerbaijan is returning to Yerevan”? It means they are attempting a crime against the independence of the Armenian state? This will not happen. The rhetoric, in any case, hinders the talks”, he said.

He noted that contrary to many predictions, the domestic political situation in Armenia after the June 20 snap parliamentary elections has become more stable. “Just a month ago it seemed this country could be embroiled in a domestic conflict. The level of resistance, the escalation of passions have reached the brink of violence and clashes in Armenia. Fortunately, this didn’t happen as Armenia entered into a peaceful existence phase. And Azerbaijan needs to understand that although Armenia has faced heavy developments, it remained stable inside and is ready for serious political steps by enjoying an international reputation”, Avigdor Eskin noted.