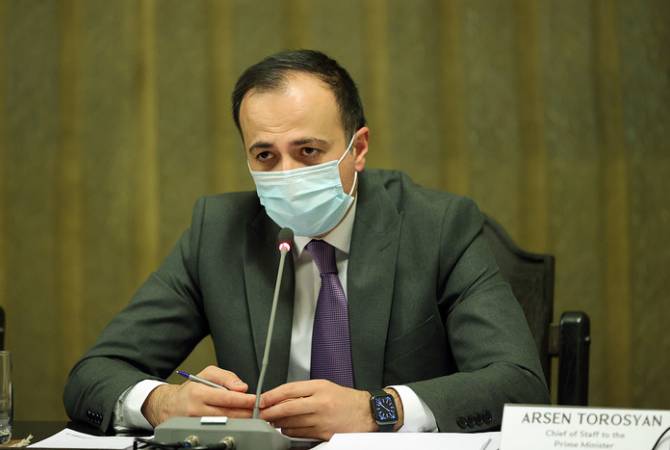 
YEREVAN, MAY 18, ARMENPRESS. Armenian government officials held a meeting with representatives of the UN Armenia Office and the diplomatic corps to discuss the preparation and holding of the June 20 early election of parliament, the Prime Minister’s Office said in a news release.

Prime Minister’s Office Chief of Staff Arsen Torosyan said at the meeting that all available resources must be utilized to hold the election on the highest possible standards with the purpose of ensuring democracy, transparency and credibility. Torosyan stated that the government and the central electoral commission will jointly make all efforts to hold free, transparent and fair elections and constantly improve the electoral process. “I am sure that through joint efforts we will be able to achieve this,” Torosyan said.

Torosyan emphasized the importance of the work of observer missions in the process of organizing the elections. He also addressed the need for properly organizing the election in terms of the ongoing pandemic. “The snap election contains an important challenge which we can’t ignore, it is time. In order to hold high-quality, transparent, free and fair elections we must use the entire set of tools, but in a twice shorter period of time,” Torosyan said.

Central Electoral Commission chairman Tigran Mukuchyan stressed the importance of having relevant technical equipment in district centers, as well as the need to organize training of specialists and employees. He also addressed the issue of raising awareness among the voters on the electoral code changes. Mukuchyan said guides and ads will be prepared. “We are also planning to have separate bulletins so that voters get informed and be ready to the specificities of the new voting type. As you know these changes were adopted quite recently, the changes make the electoral process easier but it is highly important to inform the voters about this all in a short period of time,” Mukuchyan said.

He added that the voter lists will be published, live transmission video cameras will be installed in polling stations for transparency, just like during the previous election.

The representatives of the international organizations and the foreign diplomats expressed readiness to support the process of holding free, fair and transparent elections.