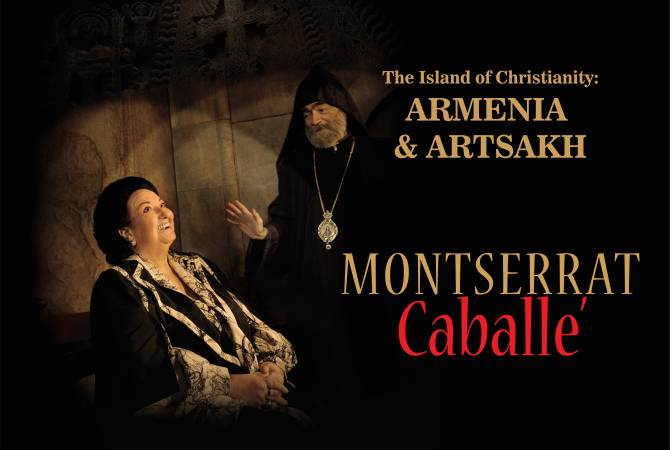 
YEREVAN, DECEMBER 9, ARMENPRESS. The great Spanish soprano, Montserrat Cabballé, who died in 2018, recorded her farewell album following a visit to Armenia and Artsakh to pay tribute to the historic and cultural heritage of the first Christian nation in the world.

The album, The Island of Christianity: Armenia and Artsakh, with contributions from Vangelis and Brian May, was originally available on limited release. It was released on December 7th 2020 by Starmus, the global festival of science communication and art.

In 2013 and 2014, the legendary soprano Montserrat Caballé (1956-2018) visited some of the most ancient churches, cathedrals and monasteries in the world, in homage to the 1700 anniversary of the adoption of Christianity as the state religion in Armenia. She performed in Yerevan and Stepanakert and recorded several pieces, among them two Armenian songs.

Impressed and deeply touched by her experience of visiting Armenia and Artsakh, including the historic sites of St Echmiadzin (Armenia, 385 AD) and Amaras (Artsakh, 338 AD) Caballé said: “Armenia is far from me, but it is close to my heart. Christian to the core, I fell in love with Artsakh and Armenia”.

She called this album inspired by Armenia and Artsakh The Island of Christianity: Armenia and Artsakh. The original limited edition of “The island of …” containing a CD, DVD and blu-ray disks was first released and presented in December 2013 in Paris.

The album contains 10 songs and videos with contributions from Vangelis, Brian May from Queen, Royal Philharmonic Orchestra, and Caballé´s daughter Montserrat Martí. The two Armenian songs included in the album are Krunk and Chinar es by Komitas, a famous Armenian musician, composer, arranger, priest and founder of the Armenian national school of music, who developed a severe mental illness after suffering and witnessing the horrors of the Armenian Genocide in Ottoman Turkey in 1915. Both songs were arranged by John Metcalfe, performed by the Royal Philharmonic Orchestra and recorded at the Abbey Road Studios in London. The album also includes a new composition by Vangelis, La Habanera, written by Vangelis for Montserrat Caballé.

In addition, the great soprano selected Vangelis’ song Like a Dream to present the 10th century Armenian monastery of Dadivank (Artsakh), a treasure of early Armenian Renaissance that had had been a sanctuary since I century AD. The album is significant in one more way: 25 years after her collaboration with Queen frontman Freddie Mercury, Montserrat Caballé returned to Queen to record Is This the World We Created? with Brian May. Arranged and produced by Brian May, the song is accompanied by a video recalling Holocaust, Armenian Genocide and other atrocities against humanity. The magical Armenian duduk can be heard in Krunk, Chinar es and La Habanera, conveying them a special atmosphere and charm. Both Montserrat Caballé and Vangelis are great fans of this traditional Armenian musical instrument. As for Brian May, the rock star has performed a theme from Hans Zimmer’s Gladiator with the Armenian duduk Maestro Jivan Gasparyan at 46664 in Tromso in 2005.

Montserrat Caballé was one of the most acclaimed opera singers of the world. She has also performed in a wide range of non-classical genres, among them Barcelona, her famous duet with Freddie Mercury. A winner of multiple international awards including Grammy, and for her wide international recognition and outstanding contribution to various genres of world music, she was a Peace Ambassador of United Nations and Goodwill Ambassador of UNESCO.