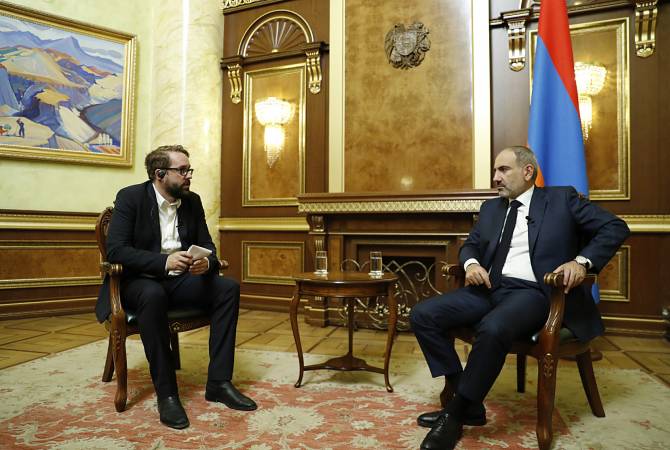 To the remark that Nagorno Karabakh conflict has not received adequate international attention and that the world is more interested in Donald Trump and his infection with coronavirus, PM Pashinyan answered, ‘’I think that the developments in our region receive adequate international attention and this is maybe for the reason that mercenaries and terrorists have appeared here from Syria’’, Pashinyan said, adding that they have been recruited by Turkey to fight against Nagorno Karabakh (Artsakh) and Armenia.

‘’I think that the current situation is no longer a local security issue and has become a global issue’’, Nikol Pashinyan said, noting that Turkish servicemen are also involved in this process and this is the demonstration of the Turkish imperialistic policy. ‘’These are actions aimed at the restoration of the Turkish Empire, which are in the same logic as Turkey’s activities in the Mediterranean, Middle East and Libya’’, he said.

To the question what are the motives of Turkey to support Azerbaijan, PM Pashinyan answered, ‘’I already said that that’s the result of Turkey’s and Erdoğan’s imperialistic policy. And I think that in most probability there is a task of depriving Azerbaijan of sovereignty so as it can be swallowed by Turkey’’, Pashinyan said,  emplacing that Armenians are the last obstacle on the way of Turkey to north, south-east, and east.

‘’If the international community does not react to all this adequately, they should be ready to wait for Turkey near Vienna’’, Pashinyan said, adding that the European countries should clearly condemn violence, the launch of violence and the joint aggression of Azerbaijan, Turkey and terrorists against Nagorno Karabakh and Artsakh.