‘Suffering of the Armenian people will never be forgotten’: Bundestag MP 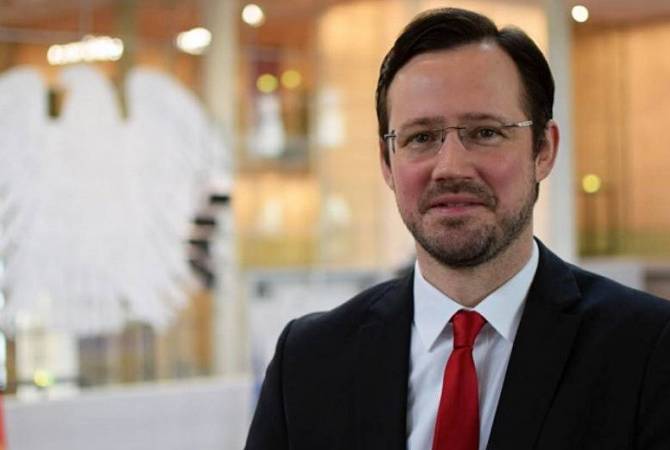 
YEREVAN, APRIL 24, ARMENPRESS. Dirk Wiese - Coordinator for Intersocietal Cooperation with Russia, Central Asia and the Eastern Partnership Countries and Member of the German Bundestag, remembers his visit to the Tsitsernakaberd Armenian Genocide Memorial and hopes that it may help to keep memory alive.

The Bundestag MP gave an exclusive interview to ARMENPRESS.

- In the Resolution, adopted by the German Bundestag in 2016, the necessity of including the topic of Armenian Genocide in the German curricula/ educational programs, as a part of the history of ethnic conflicts in the 20th century, is highlighted. What steps have been taken in this direction?

- In my capacity as a Member of the German Bundestag, I voted in favor of the political resolution adopted almost unanimously by the German Federal Parliament on June 2nd 2016. The text calls amongst others for a broad public debate and aims at encouraging constructive steps by actors in Germany, Turkey and Armenia in order to foster mutual understanding and reconciliation. After having assumed office as the Federal Government's Coordinator for Intersocietal Cooperation with Russia, Central Asia and the Eastern Partnership Countries in 2018, I had the privilege to visit Yerevan in early March 2020, which included an impressive visit of "Tsitsernakaberd" memorial complex. I laid a wrath there to remember the suffering of the Armenian people, which will never be forgotten. I hope that my visit to Yerevan and Tsitsernakaberd might have served to keep remembrance alive, as previous political visits by Federal Chancellor Angela Merkel and then Federal Foreign Minister Frank-Walter Steinmeier have done. Since school curricula in Germany are within the competence of German federal entities ("Länder"), I am unfortunately not in a position to provide you with detailed information on this topic.

I would however like to underline the importance of the educational work done by numerous actors of civil society in recent years. The Federal Government provided funding for, inter alia, a project implemented by Deutscher Volkshochschul-Verband in cooperation with Hrant Dink Foundation on common remembrance and reconciliation, a project implemented by German Young Initiative on Foreign Affairs and International Relations with partner organizations in Armenia, Turkey, France and Israel on common remembrance and future relations as well as for a "Concert dedicated to Gomidas at 150" performed by German Maxim Gorki Theater in cooperation with Anadolu Kültür and Kalan Müzik.

- For over 30 years there have been no diplomatic relations between the Republic of Armenia and the Republic of Turkey. Moreover, Turkey keeps the border with Armenia closed. These circumstances hinder the stability and development of the region. What agenda does Germany have on this issue within the framework of the EU Neighborhood Policy?

- Germany has signed and ratified the Comprehensive and Enhanced Partnership Agreement between the EU, its Member States and Armenia, and we stand committed by its aim to "promote, preserve and strengthen peace and stability at both regional and international level, including through joining efforts to eliminate sources of tension, enhancing border security, and promoting cross-border cooperation and good neighbourly relations".

Germany is fully in line with the EU position as stated at the Partnership Council meeting on 13 June 2019, namely to support the normalization of Armenia-Turkey relations, and underlining the need for both sides to engage in this process without preconditions.

In 1915, the crime perpetrated by the Ottoman Empire against the Armenians was the first genocide of 20th century. The Armenians worldwide commemorate 105th anniversary of the Armenian Genocide on April 24.

The fact of the Armenian Genocide by the Ottoman government has been documented, recognized, and affirmed in the form of media and eyewitness reports, laws, resolutions, and statements by many states and international organizations. The complete catalogue of all documents categorizing the 1915-23 widespread massacre of the Armenian population in Ottoman Empire as a premeditated and thoroughly executed act of Genocide, is extensive.

Interview by Anna Grigoryan; Editing and Translating by Aneta Harutyunyan