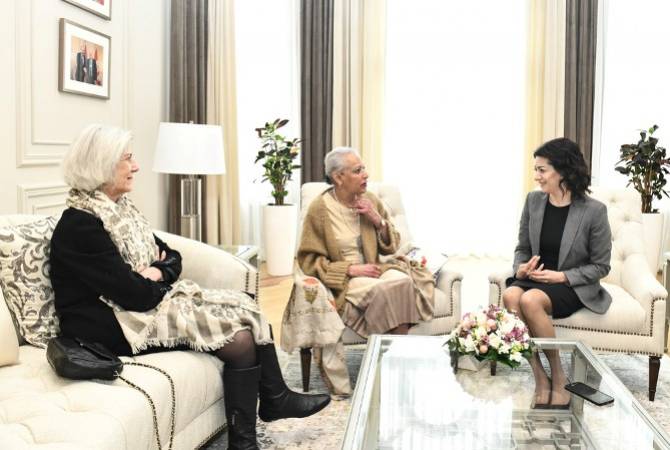 
YEREVAN, MARCH 2, ARMENPRESS.  Wife of the Prime Minister of Armenia, Chairperson of the boards of trustees of My Step and City of Smile charitable foundations Anna Hakobyan hosted today daughter of the 14th Emir of Kuwait, Sheikha Hessa Saad al-Abdullah Al-Sabah.

As ARMENPRESS was informed from the Office of Anna Hakobyan, in a warm atmosphere Sheikha Hessa Saad al-Abdullah Al-Sabah talked about her activities, particularly the Arab Council of Businesswomen, and Anna Hakobyan presented the activities of My Step and City of Smile charitable foundations, as well as the Women for Peace campaign. Presenting the goal of the campaign, Anna Hakobyan emphasized that peace is an absolute value and it’s time for women to consolidate for the sake of peace.

During the meeting the sides discussed a number of cooperation directions and reached some agreements.

Sheikha Hessa Saad al-Abdullah Al-Sabah is president of the Council of Arab Businesswomen (CABW). She is a successful entrepreneur with past work at the International Marine Petroleum Company, and within the Ministry of Defense’s Department of Medical Services.