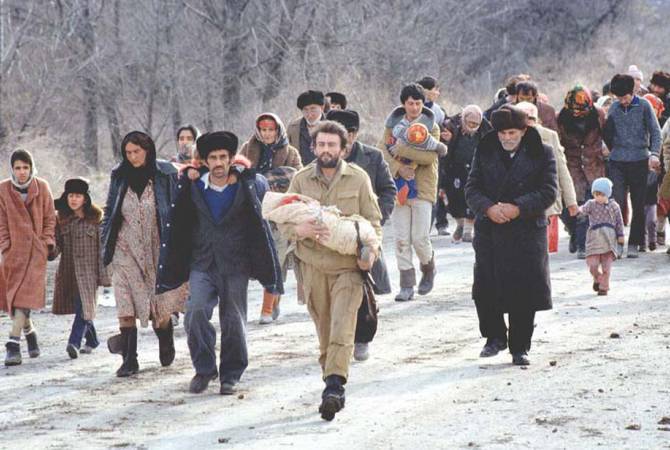 
Up to this day Azerbaijan continues to disseminate fake and hypothetical information related to “Khojaly tragedy” or, to be more accurately, the Aghdam events. The Azerbaijani propaganda machine is making efforts leading to false interpretations as if “Azerbaijanis, including women and children, were killed by Armenians in Khojaly”. The reality, however, is completely different.

As we already know, on the night of February 26, 1992, Chingiz Mustafayev, the correspondent of the former Azerbaijani ANS TV, took videos of the “Azerbaijani” corpses left at the corridor (opened by the NKR self-defence forces) and later on found 10 kms away from Khojaly. Mustafayev went there 2 times to videotape the consequences of the incident; on February 29 and March 2. According to him, he was not expected there the first time. However, during his second visit, he was accompanied by international journalists.

After the incident, on March 25, 1992,  Azerbaijani Supreme Council (National Assembly) created a parliamentary committee to investigate the case. The political aspect of the issue and the manipulations of the Azerbaijani propaganda machine about their own victims are loud and clear starting from here; the incident was named “genocide” in the above-mentioned decision to investigate the case, suggesting the “results” of the investigation which was yet to be carried out. What was behind their impetuosity? One can clearly understand their main purpose by examining the Azerbaijani sources.

Chingiz Mustafayev made a statement to the Committee as an eyewitness. His accounts were published on the Internet only after more than 25 years. He states that he went to Aghdam on February 26, and somehow convinced them to give him transport means in order to get to the scene of the incident. At first, he was told that there were corpses in Khojaly but they have already been returned. Eventually, when he was given a helicopter, he asked the pilots to fly over the place where, according to the residents who had fled from Khojaly to Aghdam, their countrymen should have been alive.

The place that Mustafayev mentioned in his speech, was 10 kms away from Khojaly and only 700 meters away from the Azerbaijani outposts. He had seen approximately 50 corpses laying on the ground at that exact place. These were the corpses which were videotaped and are being spread all over the places nowadays.

Mustafayev notes quite interesting details of the report he conducted; Azerbaijani army men from Aghdam were walking around the corpses. They had 3 helicopters with them and immediately returned back when noticing Mustafayev there. The 10 army men, as he says, went back to Aghdam in the same way they came - on foot.

To make it more clear - the place where the corpses of residents of Khojaly were laying at was just 700 meters far from the Azerbaijani outposts and they were able to walk around the place and get back to their initial positions on foot.

Despite this, Chingiz Mustafayev was assured that no one was able to go to that place as there were “Armenians” in the area. This brings up a question of how these people were killed in a territory which is in a long distance from the Armenian forces and is just 700 meters away from Azerbaijani positions and was completely at their disposal.

Another question follows; on March 2, when Mustafayev went back to the scene of the incident for the 2nd time, he noticed that some of the corpses were maimed and mutilated, and some others’s skins were peeled off and had other signs of torture.

All of the above mentioned incidents happened during the period of February 29 and March 2, when, as stated by Mustafayev, Azerbaijani army men were freely walking through the corpses. All of these are proved by the footages as well.

Here’s the question: how would Armenians be able to mutilate the corpses at a place which was under the Azerbaijani control. On the other hand, it is in the contrary to the common-sense to enter that area, resorting to violence, even if granted such opportunity, knowing that Azerbaijan had already invited International journalists who videotaped the consequences of the incident. The political opponent of the President of Azerbaijan Ayaz Mutalibov Abulfaz Aliyev (Elchibey) and his ruling “Popular Front Party” had many of such motives. A few days after the incident, on March 5, Mutalibov had to resign because of this incident. It is important to note that the position located in the vicinity of the scene of the incident was controlled by Popular Front Party’s army men.

The Azerbaijani side left these questions unanswered up till now, using the tragedy to earn political dividends. All of the eyewitnesses are either silenced already or are being silenced. Only 3.5 months after the incident, on June 15,1992, Chingiz Mustafayev was killed “by accident” by a shrapnel.

The other proof of the widespread propaganda launched by Azerbaijani authorities is Eynulla Fatulayeva. She has investigated the matter before being imprisoned and transforming into a state-supported propagandist. In conclusion, she did emphasize that Armenians had opened a humanitarian corridor allowing the residents of Khojaly to securely leave the city.

To know more about the falsifications on Khojaly case, please visit xocali.net website.