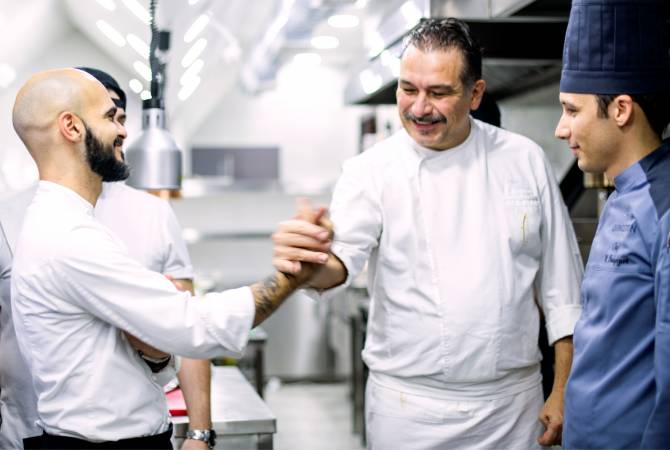 Italo Bassi is a chef-legend who, as the irreplaceable chef and face of the Florence's Enoteca Pinchiorri restaurant, has won three Michelin stars for that restaurant and retained that stellar title for about 12 years. In 2015, Italo Bassi opened his own Confusion restaurant featuring Italian high cuisine and Japanese cuisine. In 2018 Confusion received its first Michelin star.

Rafael Kazumyan is an alumnus Cordon Bleu Paris, which is considered the best in the culinary world. He is the winner of the 1st “MasterChef” show in Russia, founder of the first Private Chef Service Company in Moscow. He worked at several Michelin-star restaurant. Rafael Kazumyan is known to Armenian audience as the host of the "Hot Kitchen" culinary show. 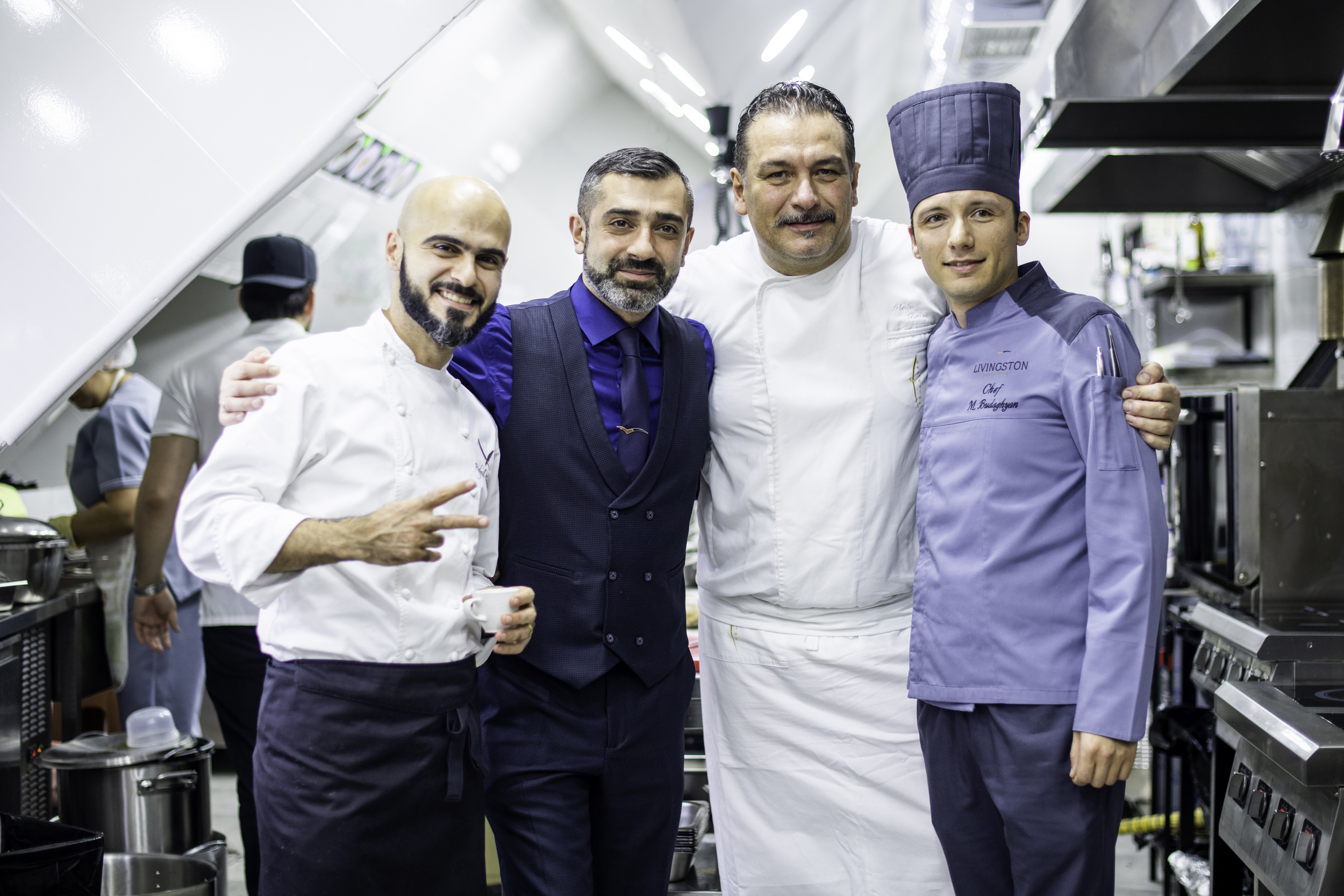 The two culinary art professionals presented to the guests a real “symphony of taste” for the real fans of the high cuisine and high-quality service. During the “Four Hand Dinner”,  the guests enjoyed local products in the new way.

The general Director of Yeremyan Projects David Yeremyan said in his speech: Livingston restaurant has a mission of disseminating and development of high and fusion cuisine’s culture and culinary arts. We continuously create, make innovations, organize events. Dinner in 4-Hand Format by Italo Bassi and Rafael Kazumyan was the best example of presenting high-cuisine culture. The rich set menu prepared by the Armenian products was impressive and exemplary. Today we have already had a goal to make the dishes of the national cuisine fusion, and we will accomplish that with the help of our skilled and professional chefs. "

Several Michelin stars holder chef Italo Bassi shared his impressions: “The four hands format is unique in itself. It brings together two different chefs who don't know each other, have different culinary traditions and signature, but it's not an obstacle to satisfy.  I think our partnership with Rafael is successful. Rafael and I have entirely different characters that created harmony in the kitchen. Rafael is a really talented chef. It is nice to see that there are experts in Italian cuisine in Armenia too. I also appreciate the willingness and high professionalism of the culinary team, which helped to have a great result and to please the guests.”

Talking about the cooperation, chef Rafael Kazumyan noted: “The four hands format is not a novelty for me, I have had such collaborations before. I like this format a lot. It's the teamwork that is most interesting. It was a great pleasure for me to work with Italo, as I am a big fan of Italian cuisine. During my career, I have specialized in this field and have had experience working with Italian Chefs, which has facilitated our cooperation. We have developed a set menu in the traditional Italian style using Armenian products. We can say that this is a fusion that combines different culinary traditions. The best manifestations of fusion cuisine in Armenia can be found at Livingston Restaurant, which I think is one of the best high cuisine restaurants in Armenia”. 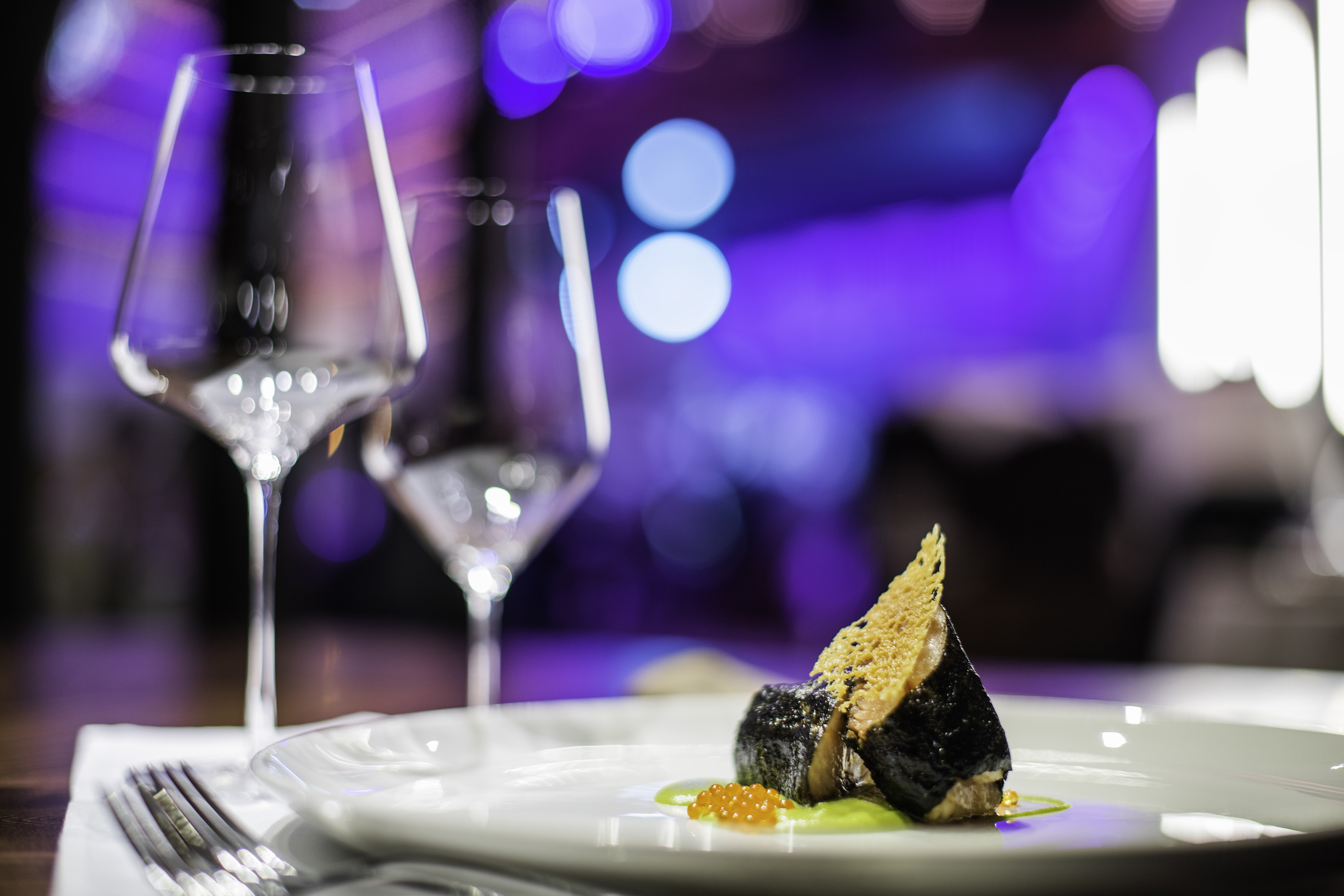 The masterpieces of the prestigious chefs were enjoyed by guests at the unique conceptual Livingston restaurant, featuring a menu of high European cuisine, high-quality service and superb music.

Italo Bassi, a chef-legend who has been the irreplaceable chef and the face of Florence's Enoteca Pinchiorri restaurant for 27 years.  His carrier at Pinchiorri’s restaurant has started at the age of 19. At the age of 23, he was sent to Tokyo as executive chef to start up the new Giorgio Pinchiorri ’s restaurant in Japan-the first Italian high-level restaurant in Asia. In 1993 he returned to the Florentine mother’s house, where he conquered 3 Michelin stars in 2003. That prestigious title he managed to keep for about 12 years. This, of course, could please many, but not him. In 2015, after 27 years of collaboration Italo Bassi left Enoteca Pinchiorri for his own project- “Confusion “- his new vision of haute cuisine, based on Italian culinary culture and enriched by exotic aromas and refined ingredients, a gastronomic meeting point between modernity and tradition. In the 2018 Confusion boutique restaurant in Porto Cervo was rewarded with the Michelin star.

Rafael Kazumyan is an alumnus of Paris' Cordon Bleu, considered the best in the culinary world, winner of Russia's first MasterChef show. He Founded the first Private Chef Service Company in Moscow. He worked with Novikov Group restaurants at SYR with Moscow's top chef Mirko Chago. Then he rediscovered the gastronomy with one of the top 3 Chefs in the World, Renè Redzepi one of the world's top three chefs at Noma's 2-star Michelin restaurant. Kazumyan was the executive chef at Pipe Restaurant in Moscow and chief executive of La Perla Hotel's five-star restaurant in Montenegro. Then he worked at Restaurant "l'Effervescence", Tokyo (2 Michelin stars). In 2018, he was  Executive-Chef of ZalivMN company, Montenegro which includes 8 restaurants. Rafael Kazumyan is known to Armenians as the host of the "Hot Kitchen" culinary show.

“Livingston” is a new conceptual haute cuisine restaurant of "Yeremyan Projects".  "Livingston" restaurant is located on the 9th floor of the Sport and Concert Complex after Karen Demirchyan, a symbolic place in Yerevan, in a building that is one of the main architectural monuments of the capital. It's a high-end restaurant of European cuisine with a splendid performance of qualified professionals. At “Livingston” Restaurant haute cuisine and high-quality service are accompanied with highly artistic musical compositions. The restaurant offers a special music program to its visitors: from 19.00 till 23.00 you can enjoy the most famous music of various genres performed by the "Livingston" band, and from 23.00 - dance to the rhythms of famous DJs.

“Yeremyan Projects” is a unique project founded by restaurateur David Yeremyan. Since the founding of the company, “Yeremyan Projects” team has been investigating and revealing ancient Armenian dishes, presenting them to the public in a new way - in compliance with modern requirements, trends and taste. Currently "Yeremyan Projects" company includes 10 conceptual restaurants  («Livingston» haute cuisine restaurant, Stake House “Smoking Chef Grill & Wine”, “Lavash” and “Sherep” restaurants, “Tavern Yerevan Riverside” restaurant,  “Tavern Yerevan” chain, "Yerevani Shaurma" fast food restaurant chain), as well as the Academy of Culinary Arts and Hospitality,  Collection point of agricultural products in Avan community of Aragatsotn Marz (within the concept of the world-famous "from-farm-to-table"), "Artskh” plant.“Yeremyan Projects” has made it its mission to draw the attention of gourmets and travellers to Yerevan as a unique gastronomic and tourist destination, to elaborate diverse business initiatives in the field of the restaurant business.

Michelin Guides are a series of guide books published by the French tyre company Michelin for more than a century. The term usually refers to the annually published Michelin Red Guide, the oldest European hotel and restaurant reference guide, which awards up to three Michelin stars for excellence to a select few establishments. The acquisition or loss of a star can have dramatic effects on the success of a restaurant. Michelin also publishes a series of general guides to cities, regions, and countries, the Green Guides.