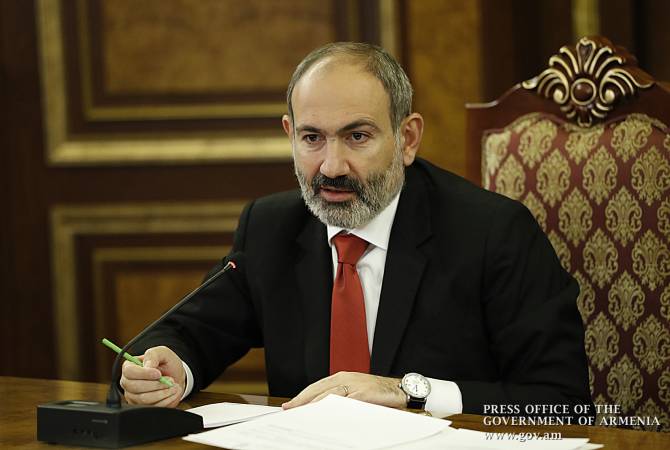 
YEREVAN, DECEMBER 13, ARMENPRESS. The adoption of the Resolution 150 by the US Senate raises the process of the international recognition of the Armenian Genocide to a new level, Prime Minister of Armenia Nikol Pashinyan said at a consultation relating to the defense ministry’s 2020 budget allocations, commenting on yesterday’s passage of the Armenian Genocide recognition resolution by the US Senate.

“On behalf of the Armenian people I want to thank all members of the US Senate, the members of the House of Representatives, because the latter also adopted an Armenian Genocide recognition resolution in late October. We must address words of appreciation to the Armenians of the United States, to all those organizations and individuals who had contribution to this important and historic decision”, Pashinyan said.

He also congratulated the Armenian people on this historic victory of the truth which opens a new page for the international recognition of the Armenian Genocide and brings the process to a new level.

“The international recognition of the Armenian Genocide is important for us not only from the perspective of recording the historical truth, but also as a key component of the global movement for preventing genocides. You know that by the proposal of Armenia the United Nations declared December 9 as the International Day of Commemoration and Dignity of the Victims of the Crime of Genocide and of the Prevention of this Crime. The recognition of the Armenian Genocide also has a security component for us, and this process is important in terms of ensuring the security of our country and its people. I want to state that not the 1915 Genocide, but Turkey’s denialist policy forces to state that Turkey’s that policy remains a threat for the Armenian people and Armenia”, Pashinyan said.

According to him, the decisions made by the US and several other countries prove that Turkey is running an aggressive and unconstructive policy in the region. “Let’s look at what is happening in our region: Turkey’s aggressive policy against Syria, Iran, Cyprus, Greece, and Turkey keeps Armenia in blockade which, in fact, shows the role that country plays today in our region.

He stated that from the first sight it would seem strange that the victims may have a problem of protection of their dignity, but during this year the Turkish president’s cynical expressions on the Genocide victims came to prove that there is a need for such protection. “When that day was declared in the UN, it was difficult to predict that there would be such expressions which would fully justify that formulation”, he said.