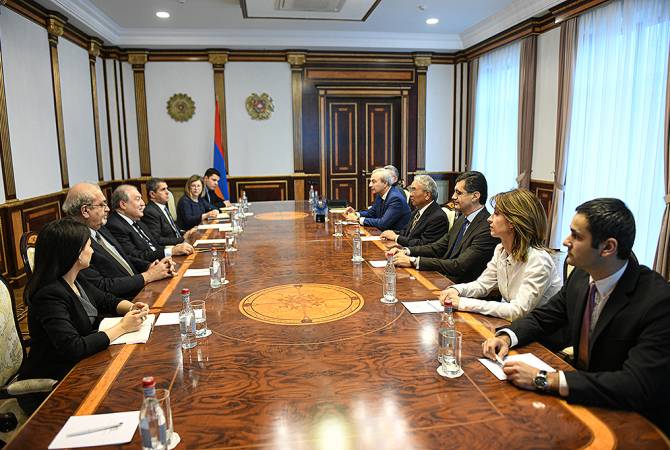 Takeo Kanade is the author of the Theory of Origami World. He is also a professor at the Carnegie Mellon University.

Congratulating the Japanese scientist on receiving the award, the Armenian President said: “Each innovation, even the biggest one, cannot solve the problems, it can answer to only one of the hundreds of questions. Your activity, as a person who did a great work for the development of technologies, brings new questions – what will happen then? As you said, some of these questions are philosophical, but tomorrow they will already become practical.

I am happy that currently Armenia is in the period of becoming a technology hub. I am happy because this is not directly guided by the government or other institutes, but there are many enthusiasts.

The Presidential institute will assist the technology development within its powers. We have our own initiative, called ATOM. We invited numerous major companies, and I think these companies can be engaged here in the development of artificial intelligence, math modeling and other spheres”.

President Sarkissian said during his working visit to Japan he met with the leadership of the Japanese Mitsubishi Heavy Industries, discussed the possibility of implementing a joint program in Armenia. “We also had an interesting meeting with Prime Minister of Japan Shinzō Abe”, the Armenian President said. “We discussed what we can do together and identified the new technologies where Armenia and Japan can cooperate”.

Takeo Kanade thanked the President of Armenia for highly appreciating his activities and stated that he is impressed with Armenia and its people. He stated that he sees a great future for the field of high technologies in Armenia, adding that parents both in Japan and Armenia want their kids to get higher education.

The Armenian President agreed with the Japanese scientist and stated: “Armenians around the world give great importance to education, want their kids to have a better life, but this better life requires higher education”.

The President invited Takeo Kanade to attend the 2020 Armenian Summit of Minds which will focus on topics such as the geopolitical events of the 21st century, the impact of new technologies and artificial intelligence.