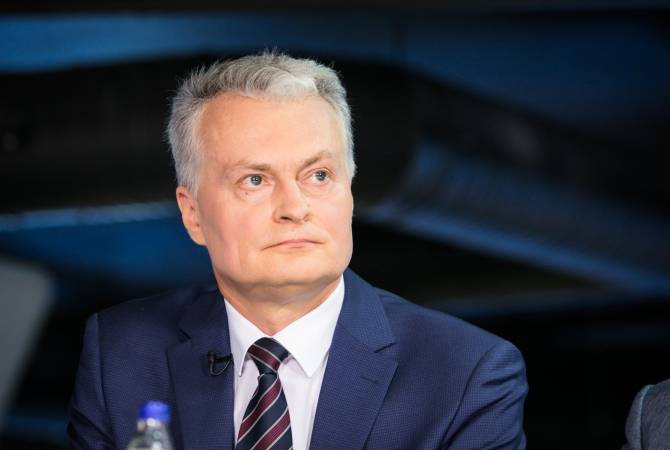 
YEREVAN, DECEMBER 4, ARMENPRESS. President of Lithuania Gitanas Nausėda thinks that the recognition of the Armenian Genocide by Turkey is a matter of time and one day it will happen.

The Lithuanian President gave an interview to Delfi’s reporter Vladimiras Laučius during which he touched upon the NATO-Turkey, Turkey-EU relations along with other issues.

ARMENPRESS presents the respective part of the interview:

Vladimiras Laučius: You emphasize common values as a fundament of the “friendship alliances”. But what do you think about Turkey? Erdogan openly threatens Europe, urges the Turks to have multiple children so that they become the “future of Europe”; his army attacks Kurds, the allies of other NATO countries; Turkey is subjected to Islamization, it rapidly moves away from the values that NATO was founded to preserve for. Does the West go along with “this” Turkey - bearing in mind Russia’s value-alienation from the West?

Gitanas Nausėda: It’s a very difficult question. In fact, Turkey is changing. We see rather aggressive actions destabilizing the region. And in this regard, the question is whether the West will achieve any positive result by moving away from Turkey or taking any decision on it or its NATO membership? The question is, will this bring more peace to the region and to the world in general?

However, Turkey's role in the region, both in terms of refugees and in terms of military strength, remains crucial. And perhaps at this point it is necessary to openly refer to the problems that Turkey is raising, but at the same time to monitor the situation and draw conclusions as to what could happen in the future without taking any radical decisions. Because the role of Turkey remains very important due to the circumstances that I’ve mentioned.

Vladimiras Laučius: Turkey is a NATO country that committed Armenian Genocide, which, moreover, has been recognized by Lithuania and, more recently, by the US House of Representatives. Turkey does not recognize the fact of Genocide. Can you imagine a situation, where a state that does not recognize Holocaust is a NATO member?

Gitanas Nausėda: No, I can’t. But, nevertheless, on this issue [the recognition of Armenian genocide] I still think that it is a matter of time and one day it will happen. Maybe it won’t happen very soon. However, it is difficult to expect this to happen in the next five or ten years. But I think, that as it is a fact, one way or another it will be recognized.

Following the interview journalist Vladimiras Laučius published an article in the Delfi relating to the denial of the Armenian Genocide by Turkey, human rights violations in Turkey and many other issues.

It would be impossible to imagine Germany being a part of NATO if it had not recognized Nazi crimes, including Holocaust. However, Turkey, which is not going to admit to having committed genocides against Christian nations - Armenians, Assyrians and Greeks - is a NATO member.

The preamble to the North Atlantic Treaty states that the parties to the Treaty “are determined to safeguard the freedom, common heritage and civilization of their peoples, founded on the principles of democracy, individual liberty and the rule of law”.

Which of the above mentioned principles does Turkey preserve? Does it succeed? How it is possible to preserve the civilization to which it does not belong or to safeguard principles that are hardly followed in the country?

If all you need to be a NATO member is simply having a strong army, a semblance of democracy and some common interests with Western countries, then how come Russia is still not a part of NATO?

One may say, that Russia violates the principles of inviolability in South Ossetia and Ukraine. However, for the NATO countries, this seems to be no longer an insurmountable moral and legal issue after the 1974, when Turkish troops occupied Northern Cyprus.

Now Turkey is also occupying as much of Syria’s territory as possible a, amicably negotiating with Russia for patrol zones as well.

How about the issue of armament and military compatibility? After Turkey's purchase of the Russian S-400 missile systems and considering of buying Russian Su-57 fighter jets, it no longer seems to be a major obstacle to Russia's integration into NATO. It is obvious, that the indirect integration carried out through the armaments and the Turks is already underway.

Moreover, Turkish law allows to prosecute people affirming the genocides executed by Turks claiming it insults Turkish people. This is very similar to Vladimir Putin's Russian law and ideological propaganda of the history of his country.

The genocide of the Christian nations in Turkey - in terms of cruelty, extent, torture and ideological justification - is very similar to the Jewish Holocaust committed by the Nazis.

For example, Mehmed Reshid, a doctor in the Ottoman Empire, was famous for treating Armenians as second-rate people compared to, in his opinion, more advanced Muslims.

He ordered to attach horseshoes to the feet of Armenian exiles to make it more entertaining to watch them go into exile after such an execution. He also liked to crucify them, given the Armenian religion. In 1978, in Turkey, a NATO member, an encyclopedia was published which describes Mehmed Reshid as a "great patriot."

Like their future Nazi colleagues, Turkish doctors conducted brutal experiments on the “second-rate” people. For example, they injected Armenians with blood of patients suffering from typhoid fever in search of a vaccine for the disease. A memorial museum was even built in Istanbul for the doctor famous for aforementioned experiments - he is considered the father of Turkish bacteriology.

Ali Saib, head of the Trapezund Department of Health, had diligently performed his professional duty by forcing pregnant Armenian women and children to drink poison. If they refused, they would be drowned in the sea.

Saib loved to inject a lethal dose of morphine to the Armenian exiles, who miraculously survived a disastrous journey through the wilderness. Also, he used to kill children in mobile hot steam baths.

Nowadays, streets and significant public sites in Turkey are titled after the organizers of the genocide - Talaat, Yemal, Enver. It would be the same if another NATO member - Germany - would name the streets, say, Himmler Straße.

The main problem of Turkey’s membership in NATO is not that it blocks Baltic defense plans, buys Russian S-400 refusing American armaments, supports ISIS and Jabhat al Nusra fighters, occupies Syrian territories, where along with its Arab allies, destroys remnants of Christian communities in Asia Minor.

The fundamental problem is not that RecepTayyip Erdogan sees a demographically and culturally revitalized Ottoman Empire in Europe where high-fertility Turkish population will be able to impose their own rules.

The main problem of Turkey as a NATO member lies not in its actions, objectives, political and social realities or its attitude towards the West. This approach should not at all be surprising after centuries. The problem here is not the Turkish approach, but the Western one.

The genocides of Turkey’s Christians- Armenians (killed at least 1.5 million), Greeks (killed about 750,000) and Assyrians (approx. 300,000 victims) - have been officially recognized by the International Association for Genocide Scholars.

In Switzerland, Slovakia, Greece and Cyprus one may be prosecuted for denying the Armenian genocide. Slovakia and Greece are members of NATO, just like Turkey, which stubbornly denies genocide. It is a sort of phantasmagoria. Do you still think aforementioned countries belong to common civilization, common heritage and common principles?

As for this situation, Turkey and its allies are not facing any particular problems yet. Many even rejoice and apparently take pride in having such an ally with a common (forgive me, Lord) heritage.

Well, it is true, that Turkey was an important counterweight to the USSR during the Cold War. It should be assumed, that Turkey has not yet entered the European Unionnot without a reason.

However, once there was hope that the situation in Turkey would improve. Instead, it got worse. And so, the farther it goes, the harder it becomes to explain and justify reconciling a deepening value gap.

Continuing a conciliatory approach would be even more hypocritical than hitherto the silence over the issue of genocide, selective amnesia, not talking about what could cause inconvenience to or is useless for Turkish comrades, and, to put it mildly, does not honor them.

Such an approach partly coincides with what Adolf Hitler said in 1939 as he shared his plans to exterminate the Poles: “Who, after all, speaks today of the annihilation of the Armenians?” In other words - nobody cares. And those, who defend the Western values, should they also not care about it?