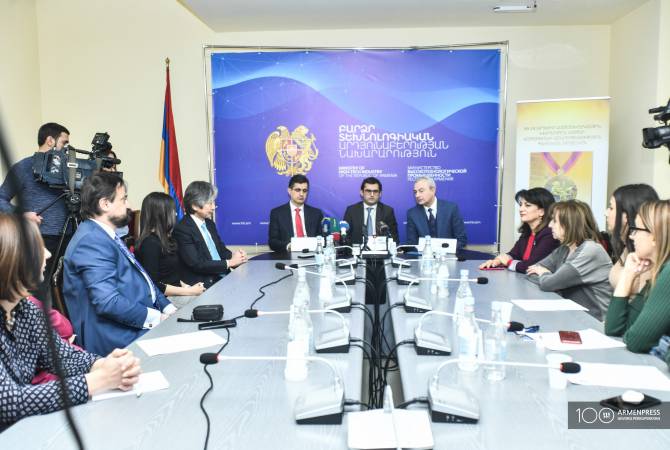 
YEREVAN, NOVEMBER 20, ARMENPRESS. The laureate of the 2019 Armenian Global IT Award, known as the State Award of the Republic of Armenia for Global Contribution to Humanity Through IT, is Takeo Kanade, a Japanese computer scientist known for his research in computer vision and his 1980 paper A Theory of Origami World. He is U.A. and Helen Whitaker Professor at Carnegie Mellon University.

The Origami world is a model for understanding line drawings in terms of surfaces, and for finding their 3- D configurations. It assumes that surfaces themselves can be stand-alone objects, unlike the conventional trihedral world which assumes solid objects.

The laureate of the prize was announced today at the Ministry of High Tech Industry in Yerevan.

Kanade will personally receive the award in December in Armenia.

A forum will take place on December 4, where the Japanese scientist will be the keynote speaker. He will then meet with Armenia’s Minister of High Tech Industry Hakob Arshakyan and Armenian IT representatives.

Prime Minister of Armenia Nikol Pashinyan will personally bestow the award upon Kanade at an official ceremony on December 4.

Hovik Musayelyan, Committee coordinator of the award, Director of Synopsys Armenia said they had a “list of legends” of potential laureates for the prize. He said that Armenia’s Ambassador to Japan Hrant Poghosyan was the one who suggested to consider Kanade’s candidcy.

Kanade was selected unanimously by the committee.

Inaugurated in 2009, the Global IT Award is granted on an annual basis to an individual whose internationally acclaimed contributions to IT have resulted in near-revolutionary or revolutionary developments that have positively impacted or hold the potential to positively impact the humanity. The contributions may be in the technological, educational, organizational, or financial areas.

In 2018 Global IT Award became State Award of Republic of Armenia for Global Contribution to Humanity through IT.