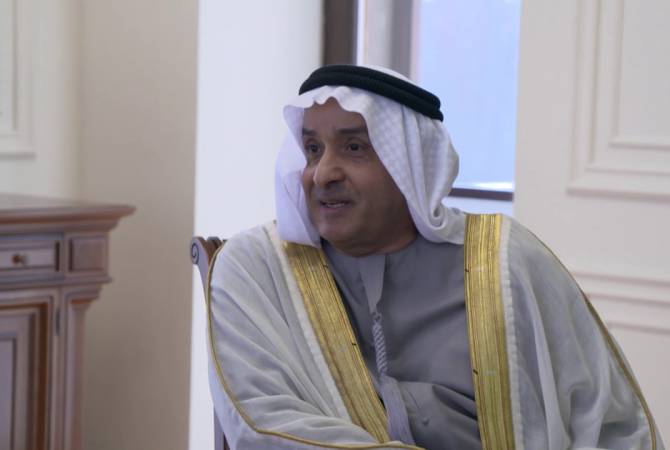 
YEREVAN, NOVEMBER 18, ARMENPRESS. Ambassador of the United Arab Emirates (UAE) to Armenia H.E. Mohammed Issa Al Qattam Al Zaabi expects that Armenia’s participation in the upcoming Expo 2020 in Dubai will be special. It is expected that in 6 months Dubai will have nearly 25,000,000 visitors. More than 190 countries have confirmed participation in the Expo 2020. In an interview, the Emirati Ambassador also spoke about the UAE’s tourism attractions and the initiative of declaring 2019 as the Year of Tolerance.

The United Arab Emirates is considered to be one of the world’s main tourism destinations and it is famous with its attractions, including museums. Please present the popular museums in the UAE.

The Al Ain National Museum (Abu Dhabi) is the oldest museum in the UAE, it has been founded in 1971 – even before the formation of the Emirates. The museum is one of the most significant tourism centers of the country, which enables to explore previously existing cultures and traditions in this region. The museum’s collection presents the UAE’s civilizational role and development, including the history of the population of the UAE’s territory starting from 6th millennium B.C. Tools made from flint, including arrowheads and sickles are exhibited here. The museum sheds light on the traditions, customs and social life of Emiratis before oil was discovered, includes numerous traditional artifacts which allow visitors to see the monumental changes that have taken place in the region during a few decades.

Etihad Museum (Dubai): The goal of the 21st century vital Etihad Museum is to inspire visitors with the history of the foundation of the United Arab Emirates. It presents the devotion and national spirit of the founders of the Emirates, encouraging everyone to follow their lead in state building.  Through an exclusive journey the museum is presenting to its visitors a variety of exhibitions, interactive programs and educational initiatives, which study the chronology of events – reaching 1971, the founding of the UAE. The museum also seeks to introduce to visitors the Emirati Constitution and present a number of documents and materials related to the country’s foundation.

The Sheikh Zayed Grand Mosque (Abu Dhabi): The Sheikh Zayed Mosque is considered to be one of the world’s biggest mosques with the most grandiose architectural solutions. It stands out with its 82 domes, more than 1000 columns, 24 carat gold-gilded chandeliers and a huge carpet – the world’s largest hand-knotted carpet. The chandelier in the main prayer hall is one of the world’s biggest chandeliers with a 10 meter diameter, 15 meter height and around 12 tons in weight. The construction of the mosque was launched by the late leader of the UAE Sheikh Zayed bin Sultan Al Nahyan as a symbol embodying Islam’s message of peace, tolerance and diversity.

It also aims at becoming a lighthouse of Islamic sciences and methodology, reflecting genuine Islamic values.

The museum is taking its visitors to 2035 for them to see the development of technologies which augment the mind’s efficiency. Visitors will also get acquainted with technology’s key role in all aspects of our social and family life and the directions for which technology can be used to manage social and economic systems.

The museum has a purpose to become a foundation for discovering maximal challenges and technologies which will develop the future.

The Louvre Abu Dhabi:  With support of the Louvre Museum in France and 13 French globally renowned museums the Louvre Abu Dhabi presents temporary exhibitions, live performances and a museum for children. Jean Nouvel’s architecture is linking land to the sea, by building a city-museum full of harmony and tranquility. The museum is presenting the essence of humanitarianism through the eyes of history.

National Auto Museum: The UAE National Auto Museum is considered to be one of the most significant and unique museums in Abu Dhabi. The museum has a unique pyramid shape and is located 45 kilometers south of Abu Dhabi. It includes some 200 cars, including American classic cars, SUVs, as well as the world’s biggest truck and a rainbow-colored collection of Mercedes cars. Visitors can also see vehicles of high ranking officials and photograph them.

Ajman Museum (Ajman) is an 18th century fortress, which until 1970 was a royal palace. The museum’s exhibits present noteworthy facts about Ajman’s past, ancient manuscripts, weapons, parts from a wooden sailing ship and creative irrigation systems. Here, the biggest discovery is an archaeological cemetery which includes pottery and jewelry dating back to 3000 B.C. An entire section of the museum is dedicated to pearl trade which was widely spread in the past in the region. The fortress is considered to be one of the best examples of Emirati traditional architectural art.

Guggenheim Abu Dhabi Museum is a global arena of contemporary culture and art. The large exhibition halls are located on the 4 floors of the building which are linked with each other with glass bridges. Each storey enables visitors to see unique works of art presented by famous modern artists. The museum provides a broad range of exhibitions containing unique exhibits of educational programs and arts. The building also allows holding various events, including lectures, discussions, seminars, concerts, film screenings and theater performances. It is expected that the opening of the museum will take place in 2022.

Expo 2020 is an international huge-scale event which will strengthen Dubai’s position as a global center, attracting economic opportunities. It will be held under the Connecting Minds, Creating the Future motto. Dubai will be the first city in the Middle East to host such an expo. It is expected that the city will have around 25 million visitors in 6 months. More than 200 participants, including 190 countries, have confirmed participation in the event, where the international community will meet in Dubai under one auspice: for innovation and human progress.

We expect that Armenia’s participation in this important international exhibition will be special, and Armenia will present to the international community its historical and cultural wealth, as well as its achievements in the modern technology and innovation sector.

The initiative aims at strengthening the UAE’s status as the world capital of tolerance, as part of which a number of major initiatives and programs are being organized, including research investments, social and cultural studies on tolerance, dialogue of cultures and civilizations. It also has a purpose of presenting legislation and policy aimed at the institutionalization of cultural, religious and social tolerance, contributing to the promotion of tolerance through the news media. The main message of the initiative is to spread the values of tolerance around the world. Tolerance and humanitarian brotherhood are an occasion to strengthen values of coexistence and encouraging integration, which in turn is strengthening the values of tolerance, harmony and peace for all layers of society of the UAE.