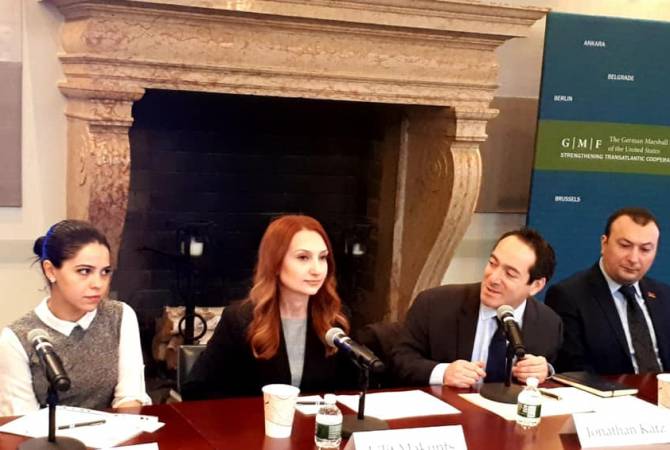 
YEREVAN, NOVEMBER 15, ARMENPRESS. Armenia has a clear commitment to build relations with its partners on the basis of mutual trust and sovereignty, head of the ruling My Step bloc of the Armenian parliament Lilit Makunts said in her remarks at the meeting of the Armenian-American Parliamentary Friendship group at the German Marshall Fund in Washington D.C.

“I presented in my remarks the ongoing reforms in Armenia, namely our clear political will on having an independent and reliable judiciary, and that the proposed legislative reforms are aimed at this very direction,” Makunts said, adding that she has also spoken about the agenda by which the delegation is visiting Washington as a friendship group.

“I also addressed issues relating to foreign policy. I reiterated our clear commitment to build our relations with our partners based on mutual trust and sovereignty. During a Q&A after my speech questions regarding the Armenia-EU relations, the Armenia-Russia relations, as well as domestic issues were voiced. I clearly noted in my speech that we, being in favor of speedy reforms, are at the same time very attentive and are ensuring the civil society’s constant involvement in this process,” Lilit Makunts said.

The agenda of the visit includes meetings with Congressmembers, USAID experts and Senators.

Makunts had earlier said that the visit differs by the fact that they are proceeding with proposals of concrete formats for cooperation in terms of conveying content to the Armenian-American strategic dialogue relations.