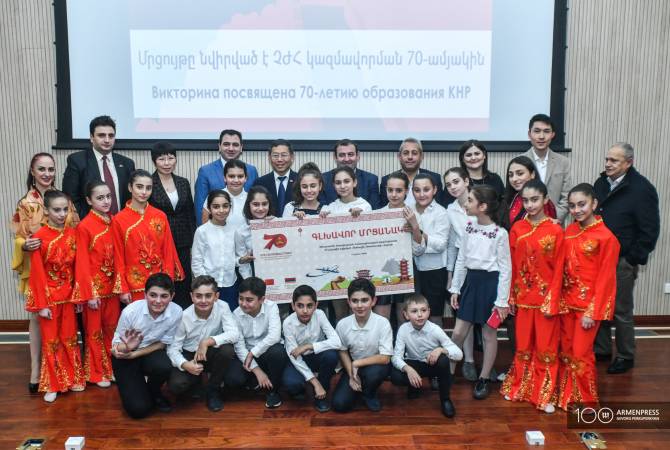 
YEREVAN, NOVEMBER 13, ARMENPRESS. The lucky winners of the Explore China competition were named during an awarding ceremony on November 12 in Yerevan.

The competition was organized jointly by the Embassy of China in Armenia, ARMENPRESS News Agency and the Yerevan Confucius Institute.

The awarding ceremony took place at the Armenian-Chinese Friendship School in Yerevan.

Participants had to pass an online quiz featuring various questions about China and those answering all questions correctly in the shortest amount of time would be named winners.

5317 people participated in the competition, with 413 participants giving the correct answers to each question. The 413 was narrowed down to the fastest-answering participants. The Grand Prix – a journey to China – went to 38-year old Garnik Hovakimyan. Two others won the 1st place and received laptops. Five participants were the runner ups and got mobile phones as prizes. Ten others were 3rd and received power-banks. Grand prix winner Garnik Hovakimyan surprised the entire audience at the event with a generous and touching move. He said he is giving his prize to the Armenian-Chinese Friendship School so that it awards the journey to one of its most distinguished students.  “I love traveling and I have been in many countries. China is also in my future plans, but I thought that I can organize the trip myself. By giving this prize to the school I want to encourage the students to study well,” he said.

Ambassador of China to Armenia Tian Erlong, organizers of the quiz and the school’s administration all highly praised Hovakimyan’s move.

Ambassador Erlong thanked for the high-level organization of the competition and congratulated the winners.

“We saw teenagers, young people and also seniors among the participants. Let me say that our Armenian friends’ interest towards Chinese culture and history pleasantly surprised us. As you know, the 70th anniversary of founding of China is being marked, and this competition enabled to get to know our country’s history more,” he said.

“The Armenian-Chinese relations entered a new phase as part of the Belt and Road Initiative. I believe that establishing a visa-free regime will also contribute to deepening the friendship of the two peoples. In this case the intercultural exchanges will become even more frequent. I am sure that due to the two sides’ diligent work the cooperation will further develop”, the Ambassador said.

ARMENPRESS director Aram Ananyan congratulated the participants and noted that the idea behind the competition was the quest. “Twenty years ago I myself took part in a competition on exploring China, and I took the third place. I remember how we would fill in the questionnaire with friends by discovering a new civilization for us. A civilization which has rich history, a culture based on values, it has given great philosophers, great thinkers, powerful historical figures. Today it is one of the most rapidly developing countries in the 21st century world, a friend of our people and country. It is a great honor to study a friend who has such a rich history and culture. The idea of the competition was the quest itself, and our participants passed this very path. I congratulate us all, all of us are winners,” Ananyan said.

Explore China was organized on the occasion of the 70th anniversary of the founding of the People’s Republic of China.