Forest preservation and restoration one of government’s priorities – Pashinyan 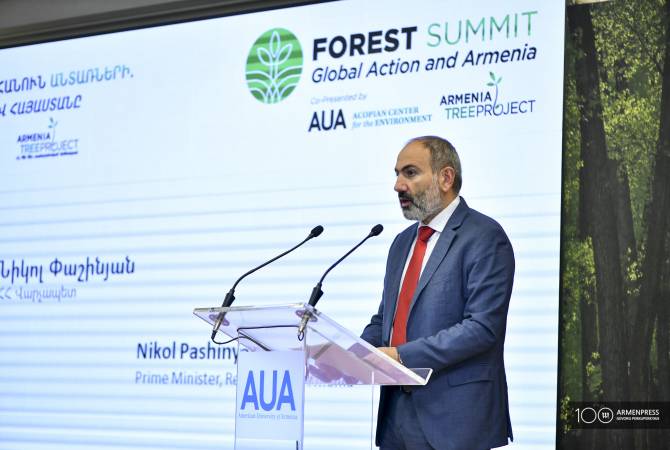 
YEREVAN, OCTOBER 22, ARMENPRESS. ‘The Forest Summit: Global Action and Armenia’, organized by the Armenia Tree Project (ATP) charitable foundation and the Acopian Center for the Environment of the American University of Armenia (AUA), gathered today the world leaders of the forest restoration field in Yerevan.

The summit aims at contributing to Armenia’s commitment to double the country’s forest surface before 2050, as well as to hold open and active debates on forest preservation and restoration matters around the globe.

In his remarks PM Pashinyan said the preservation and restoration of forests is one of the activity priorities of the Armenian government.

“It’s a long time our country is facing a challenge of declining vitality of forest areas. This negative phenomenon appeared due to several problems which emerged in the first years of our country’s independence, in particular in the energy sector. Later this was also combined with the global climate change tendency”, the PM said.

According to him, such kind of events are very important in terms of exchanging views and examining the international experience. Pashinyan said this summit unites the global specialists of the field from whom there is a lot to learn.

Director of the AUA Acopian Center for Environment Alen Amirkhanyan said the preservation of forests is a very important issue in Armenia.

“ATP tries to ensure stability in the field of local ecosystems. In recent years thousand hectares of trees have been planted in Armenia, hundreds of jobs have been created and a number of children acquired knowledge about the forest restoration”, Amirkhanyan said, adding that they highly value the Armenian government’s participation in this summit.

On the sidelines of the summit visits to the Dilijan National Park, ATP nurseries, centers and tree-planting sites will be organized.