The important is to keep the promise: Producer Eric Israyelyan on film about Armenian Genocide | ARMENPRESS Armenian News Agency

The important is to keep the promise: Producer Eric Israyelyan on film about Armenian Genocide 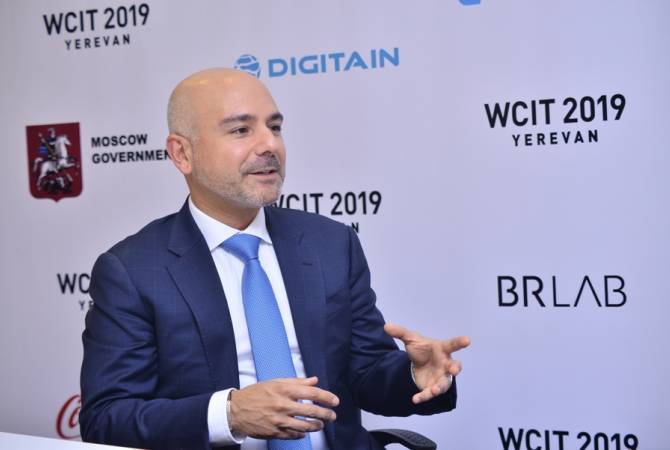 
YEREVAN, OCTOBER 22, ARMENPRESS. Two years have passed since the official screening of the film on the Armenian Genocide “The Promise”, shot by famous American Oscar-winning director Terry George, but still people and those who were informed about the Armenian Genocide via the movie continue reacting and making comments. Ethnic Armenian producer of the film says they almost every day receive such letters. He says their goal was not to force people to cry, the goal of the movie was presented in the last line of the film - “We are still here”.

Producer of The Promise Eric Israyelyan gave an interview to ARMENPRESS, talking about the topic.

-Mr. Israelian, how did you get the offer to participate in the works of producing that wonderful movie?

-I was very fortunate to have my dear friend Kirk Kerkorian asked me to work on the project. I had an incredible team helping me, and Armenian nation was actually helping me too because I always felt a sense of obligation, my great grandparents were Armenian Genocide survivors, so I always felt a sense of duty. I had a good fortune of just having a lot of people who understand filmmaking a lot better than I do, helping me along the way. I feel that ultimately people don’t really know the entirety of the story because we made a feature film as an opportunity to once and for all at least to put the story out there. But we also made a documentary at the same time. The feature film has a limited time period, and that’s why I think that the documentary art form is also very helpful to be able to take the important aspects of the story, such as Komitas, or the resistance in Musa Dagh, or the interaction for example between Ambassador Morgenthau [US Ambassador in the Ottoman Empire 1913-1916) and Talaat [minister of interior in the Ottoman Turkey], which is well documented. It was helpful to show how deep the denialism is. I think for Armenians we know our history very well, but the challenge is to educate non-Armenians. We really want recognition but also awareness. Mr. Kerkorian asked to do the film in a very specific way and with very specific instructions. We did it the way he wanted, it was meant to be like a visual museum.

-The movie was not for commercial purposes only. What do you think, to what extent such movies can contribute to the Armenian Genocide recognition process, and whether this was the main purpose of the film?

-The main purpose was to tell our story at the most visible mechanisms possible. We have incredible box about the genocide’s historical facts, but we needed to use again technology, using filmmaking to share that story with the world. It was not just about making the film, it was making the people aware about the film. We started a social movement, called #KeepThePromise, Mr. Kerkorian promised to finance the film, and we made a promise to finish the film, we made a promise to never forget the Armenian Genocide and now we have to make a promise to never allow another group of people to have genocide committed against them. There are very few films that have the actual life and impact that The Promise has had today. And we are just getting started.

-Are you satisfied with the results and the reactions?

-Actually, the job of critics is to try to talk about art, many critics have never actually made a movie, so it’s easy to talk about something. First of all we had a lot of manipulation of the film. We had roughly 50% positive reviews and 50% negative reviews, but if we look at the audience scores, they are over 90%. We have outstanding scores and continue to do so. I almost on a daily basis get a note from somebody from around the world, stating that ‘I watched it, and I didn’t know about the Armenian Genocide’. For me that’s so gratifying. Just yesterday I met with somebody who said they were watching the film and at the moment they started understanding and seeing the story of the resistance in Musa Dagh, they couldn’t stop crying. But the intention is not to make the people cry. We have very particular goals in mind, and part of these goals was at the end of the film to really show that Armenians have not only survived but also thrived. And that’s the last line of the film that says ‘We are still here’, it’s a reminder to the world that we are still here. It’s not just the tragedy of the past, we have to learn from that, because we will never forget it, but I think we also have an opportunity and an obligation to do great things with the lives that we have because we are survivors.

-Was the film about the Armenian Genocide only, or it also aimed at preventing other human tragedies?

-The Armenian Genocide has already happened, and I think what we need to do is to connect the film to other atrocities. If you look at the patterns of dehumanization of a minority group, you see the same patterns in the Holocaust, or in the Cambodian genocide. Unfortunately, we are seeing these patterns repeated in humanity. The brutality and the inhumanity demonstrated by certain groups of people towards minority groups are unfortunately not changing.

-As you work in the healthcare sector, how do you combine that with producing, given that these two require absolutely different skills?

-I do not sleep [he said with a joke]. I d science, I wanted to be a physician. And I think the opportunity to both be creative and think about science and helping people is a blessing for me. I am sometimes asked how I am interested in an art because I am a doctor. But it definitely helps me to solve problems and come up with creative solutions.