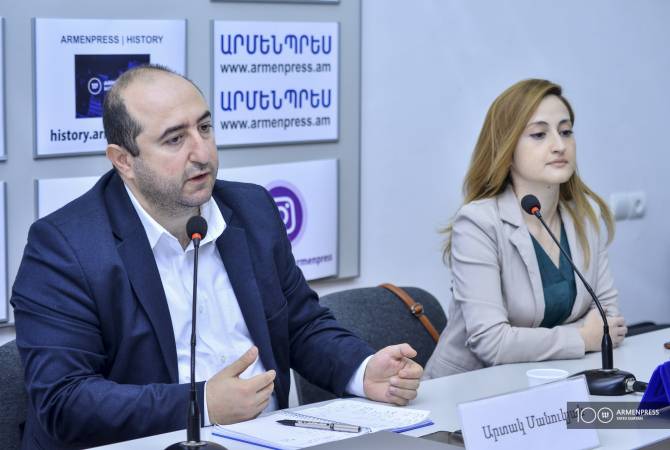 
YEREVAN, OCTOBER 21, ARMENPRESS. Improvement of Armenia’s economic growth forecasts by several leading international organizations is a good signal, Economist Inga Ghalayan told a press conference in ARMENPRESS, stating that the improvement of indicators is connected with a number of factors.

“They firstly view the country’s domestic situation, see what policy is being carried out. They also consider the fight against the shadow, corruption, the tax reforms, in addition they also notice that the inflationary pressures are lacking and the most important is that stability is being recorded in Armenia’s financial market. As you know, the World Bank has raised our competitiveness index”, she said.

Introducing the data released by international organizations, the economist said the World Bank’s current forecast for Armenia’s economic growth is 5.5% compared to the 4.2% of the past. The International Monetary Fund’s (IMF) forecast is 6% against the 4.6% of the past. These organizations also touched upon the poverty and unemployment rate in Armenia. According to the World Bank forecast, the poverty rate in Armenia will drop, becoming 7% by 2021, and the IMF’s forecast is that the unemployment rate will decline comprising 17.5%. In addition to these two major structures, Armenia also improved its positions in the Asian Development Bank’s (ADB) forecast which predicts 4.8% growth. In this context the economist attached importance to the Central Bank’s forecast according to which the year will end by 6.9% economic growth.

My Step faction MP Artak Manukyan said Armenia is among those unique countries over which forecast has been made in terms of improving the economic indicators.

“If we look at the global trends and the developments we will see that all these structures have more negative forecasts. US-China possible trade wars, certain negative trends in various regions, nearly 3% development is predicted at the global level. But we see that Armenia has further improved its positions”, he said. According to the economist, the certain decline in demand in foreign markets will be easily passed by the countries where services are more important. He said the developing countries have a greater opportunity to record a bigger economic growth for these same investments rather than the developed countries because here there is a great potential which is not utilized. The economist highlighted the fact that in 2019 Armenia’s progressive growth rates are faster than the average prediction in the world.

“We have a non-utilized potential and our prime minister constantly says that double-digit economic growth is not a myth, but for this it’s very important for us to create preconditions, but this will be difficult without investments in infrastructures”, Artak Manukyan said.

In her turn Inga Ghalayan said these forecasts of international organizations are an important signal for investments. Moody’s recently also raised its assessment over Armenia. Based on this Armenia managed to release Eurobonds at a low interest rate – 4.2%. She said after the distribution of the Eurobonds it became clear how big the demand is, and this in turn speaks about the interest of investors towards Armenia.