Armenian and Georgian Presidents to hold meeting in Japan 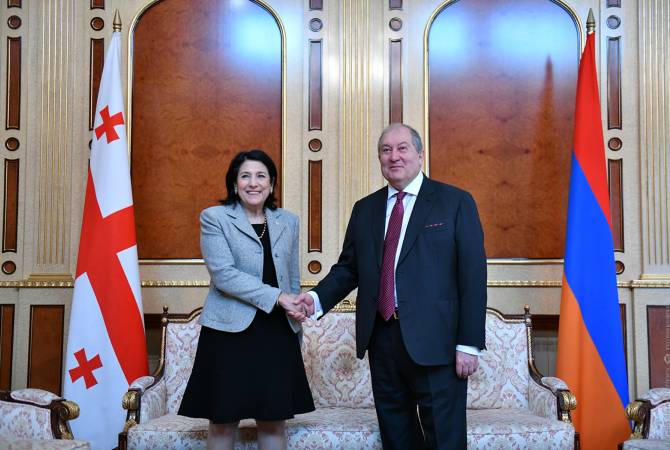 
YEREVAN, OCTOBER 21, ARMENPRESS. President of Armenia Armen Sarkissian and Georgian President Salome Zourabichvili will hold a meeting during their visit in Japan, the Georgian presidential administration said in a statement.

The leaders of the two countries will attend the enthronement ceremony of the Emperor of Japan.

According to the statement, Armenia and Georgia are actively cooperating in different areas, such as trade, transportation, tourism.

As earlier ARMENPRESS reported Armen Sarkissian departed for Tokyo together with spouse Nouneh Sarkissian on October 19 to attend the enthronement ceremony of Emperor Naruhito of Japan at the invitation of the Japanese government.

Emperor Akihito, 85, stepped down this year in April. Starting from May 1, his eldest son Crown Prince Naruhito, 59, became a new emperor.

The Armenian President will participate in a reception organized on behalf of Prime Minister of Japan Shinzō Abe. Armen Sarkissian will also visit the Tokyo Stock Exchange, the Nuclear Regulation Authority of Japan, as well as Mitsubishi Heavy Industries, one of the leading industrial and technological companies in the world.

The Armenian President is also scheduled to meet with leaders of a number of major companies to encourage them to visit Armenia, to get acquainted with the cooperation opportunities and prospects.

President Sarkissian will also deliver a lecture at the Tokyo University.