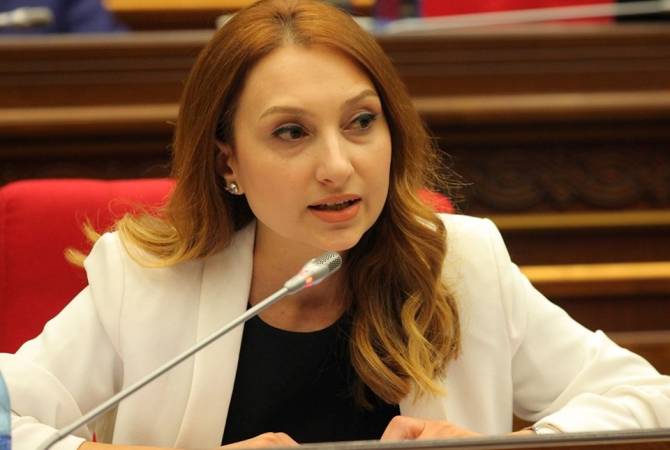 
YEREVAN, OCTOBER 18, ARMENPRESS. Head of the My Step faction of the Armenian Parliament Lilit Makunts delivered remarks at the 141st assembly of the Inter-Parliamentary Union in Belgrade, touching upon the Nagorno Karabakh conflict.

In response to the statements of the Azerbaijani representative, the lawmaker said the Armenian people remain committed to peace.

ARMENPRESS presents the full text of her speech:

Armenia as a country born from the tragedy of Genocide, is also a nation of survival, therefore, any atrocities across the world are particularly painful for us. The war, over future and the fate of Artsakh, was not our choice and was forced upon us. In the situation of status quo, however, we remain committed to peace and continue to engage in a peace process, pursuing diplomacy over the force of arms. But we sadly lack a true “partner for peace”.

Yesterday our colleague from Azerbaijan spoke about international law failing to mention one of its core rights: the right to self-determination.

Recalling history, we all know and remember how some nations became victims of unfair decisions during USSR period, among them being Armenians of Artsakh who have been living in their historical homeland for centuries. And back in 1990s before the collapse of the Soviet Union Nagorno Karabakh exercised its right to self-determination and became independent in accordance with international laws and the Constitution of then existing USSR. Of course, our Azerbaijani colleague has the right to quote the Prime Minister of Armenia but he failed to quote the key conceptual part of our PM’s speech which states that the settlement of the issue should be acceptable to the peoples in Artsakh, Armenia and Azerbaijan, which is aimed at bringing that very commitment to prepare peoples for peace to a more practical dimension. And instead of instigating “military mood” and getting local sporadic applauds it would be wiser to have a long-term vision to address the idea of peace mentioned above.

Dear colleagues, past couple of days we have been talking about ecology, human rights and how unacceptable violence is. It’s crucial that our voices raised here, produce symphony, rather than noise, to help settle problems and be safeguards of peace and international law. It’s heartbreaking to see what’s happening in Syria these days and how thousands of innocent people and kids are being deprived of life, dreams and their existential right to live in the land they were born in and belong to. Maybe it’s time for all of us, especially women, to take a leading role for protecting and safeguarding the rights of the most vulnerable groups of population (like Kurds in this case) and use the IPU as one of the most influential platforms for that.