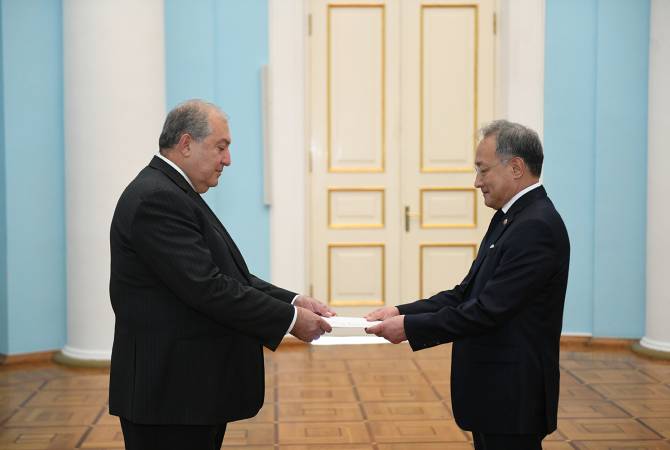 Congratulating the Ambassador on appointment, the Armenian President stated: “Despite our geographical distance there is so much we can do together. We are two ancient nations who had different historical periods, but both have qualities of a survivor. We are full of hope that your tenure as an Ambassador will be productive and will serve for the cooperation and friendship between the two countries, for the implementation of new, including economic projects”.

Highlighting the cooperation in the cultural sector, the President proposed to more frequently present the Korean culture in Armenia, also in the Presidential Residence which is open to concerts and exhibitions and already hosted a number of various cultural events.

The Ambassador conveyed the warm greetings and wishes of President of South Korea Moon Jae-in to the Armenian President. “It’s a great honor for me to serve in this wonderful country, in Armenia, as an Ambassador of Korea. I will do the utmost to intensify the relations between the two countries”, the Ambassador said.

The sides agreed that the two countries can successfully cooperate in the fields of science, technologies, mathematics and artificial intelligence. The officials attached importance to boosting the ties and contacts between the business communities of the two states.

Touching upon the economic cooperation potential, President Sarkissian said Armenia is currently closely cooperating both with the Eurasian Economic Union (EAEU) and the European Union within the frames of the Comprehensive and Enhanced Partnership Agreement (CEPA) and can serve as a good bridge for cooperation.

In his turn the Korean Ambassador said his country examines the opportunities of the Eurasian market and of closer economic cooperation with the EAEU member states.