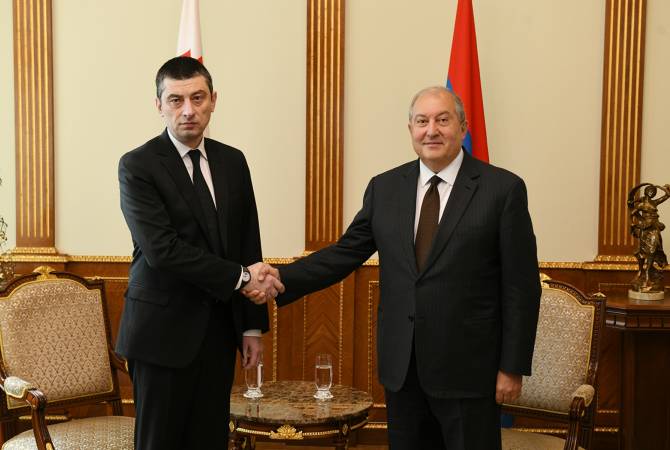 
YEREVAN, OCTOBER 15, ARMENPRESS. President Armen Sarkissian has held a meeting with Prime Minister of Georgia Giorgi Gakharia who is in Armenia on an official visit.

During a private meeting Sarkissian commended Gakharia’s official visit to Armenia and congratulated him on assuming office of prime minister, and wished good luck and realization of plans, the President’s Office said in a readout.

Speaking about the Armenian-Georgian relations, President Sarkissian said that the two peoples have a millennia old history of friendship. “However now we are in the beginning of the 21st century. New century, new issues. But I believe that this is also a great opportunity for our two states and peoples,” the Armenian President said.

Gakharia said that it is a great honor for him to visit Armenia with the status of prime minister for the first time and to have the chance to bring his contribution to the further deepening of the centuries old ties of the two peoples. “Our ancestors strengthened our friendship, and now we must think more about business. We are here with the thinking for our economic cooperation to have impact on our peoples’ welfare,” the Georgian PM said.

The private meeting was followed by an expanded format one with participation of the delegations of the two countries.

“We discussed with Mr. Prime Minister several very important issues. And my conclusion is the same: the opportunities of our joint activities are a lot bigger,” President Sarkissian said. “We can do many things together. I want Mr. Prime Minister to be certain – both the people of Armenia, the Government of Armenia, and the Presidential administration will do everything for these opportunities to become reality”.

In turn the Georgian PM said: “We discussed issues, as to what should our young people, citizens do to be bold in the global, competitive world, to utilize all opportunities of the day and become more competitive and proactive. I am convinced that through our joint efforts we will achieve our citizens being able to overcome this competition.

“For me practically this means deepening relations in the economy, politics, culture, education sectors”.

They also exchanged ideas regarding possibilities of implementing joint programs in technology, education and science, food safety, as well as within the framework of presidential initiatives.