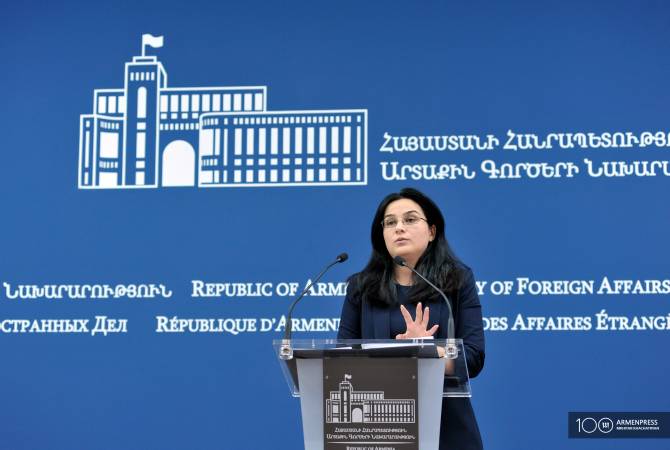 
YEREVAN, OCTOBER 14, ARMENPRESS. Armenia has clearly presented its approaches and priorities in the Karabakh conflict: the peaceful resolution of conflicts and preparation of the peoples to peace simply has no alternative, Armenian Ministry of Foreign Affairs spokesperson Anna Naghdalyan said at a news briefing when speaking about Azerbaijani President Ilham Aliyev’s statement at the Valdai forum where the latter said “Artsakh has no people, it has a population”.

“Our priorities are the Artsakh people’s security and status. I wouldn’t like to get too much into the Azerbaijani comment on peoples and population, but I will say that in a democratic society the people are also the population and vice versa. I can agree only with one terming made by the Azerbaijani president at the Valdai forum, when he said that the overwhelming majority of Artsakh’s population before the conflict was Armenians,” Naghdalyan said.

Reporters asked Naghdalyan to address Russian FM Sergey Lavrov’s statement that “the Karabakh issue is in a deadlock”.

“You know, different comments can exist, other statements followed and preceded this. I will say that this situation isn’t new. The thing is that to the Armenian prime minister’s suggested formula on the settlement having to be acceptable for the peoples of Armenia, Artsakh and Azerbaijan, we yet again hear Azerbaijan’s maximalist approach. Up to this day we haven’t witnessed the Azerbaijani president to use the word peoples in his lexicon. Whereas peace is established between peoples, by the peoples. The Armenian side and the Armenian prime minister are speaking about the people. In our society the people and their will is absolute value. Something we aren’t witnessing in Azerbaijan. I say again we will not allow any new atrocity, new genocidal action in Artsakh,” Naghdalyan said.