Number of typhoon victims in Japan rises to 40 people 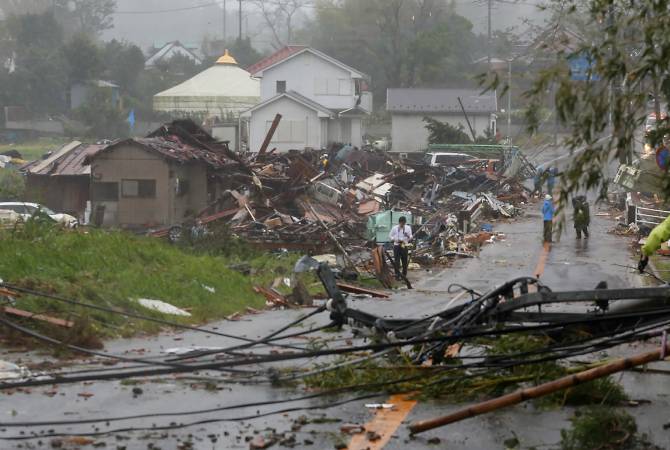 
YEREVAN, OCTOBER 14, ARMENPRESS. At least 40 people became victims of the Hagibis typhoon, which hit the central and eastern regions of Japan over the weekend, 16 are reported missing, the NHK Channel said on Monday, reports TASS.

Meanwhile, 30,000 Japanese people cannot return to their homes and stay in evacuation centers after the disaster, Japanese Prime Minister Shinzo Abe said at a meeting of the crisis headquarters for disaster relief.

“Since many people are being reported as missing, we are continuing an active search and rescue operation around the clock. We recorded a lot of damage from the typhoon, and now 30,000 people can’t return to their homes and live in evacuation”, he said.

Abe also ordered the creation of special life support groups in the affected areas, which would help restore water supply and electricity, as well as monitor the living conditions in evacuation centers.

Rescuers and units of the self-defense forces are still restoring the infrastructure in the areas hit by the typhoon.

In Tokyo and neighboring prefectures, about 53,000 houses remain without electricity. More than 130,000 apartments and houses throughout the country lack water supply.

Rail transport, including Shinkansen express trains, is expected to go on schedule during the day. On Sunday, trains traveled at extended intervals on many lines. Tokyo’s airports of Narita and Haneda on Monday receive and send flights as usual.

The Hagibis typhoon hit Japan’s mainland on Saturday. Local authorities announced a maximum threat level in 12 prefectures in the central part of the country, including Tokyo.