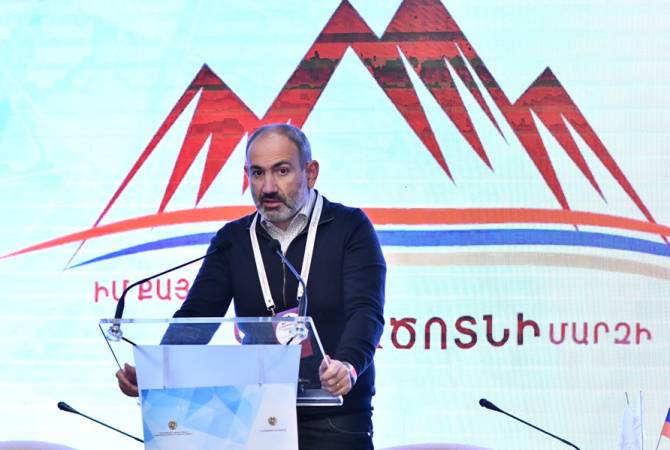 
YEREVAN, OCTOBER 12, ARMENPRESS. Armenia’s Central Bank has made nearly 433 million USD purchase in the first nine months of 2019 thanks to which the highest rate of international reserves will be recorded in Armenia this year as of December 31, Prime Minister Nikol Pashinyan said during the My Step for Aragatsotn Province investment forum in the village of Sasunik.

“This year we will most likely have nearly 7% economic growth which is extremely important and is quite a high number in the EAEU space and the whole European space in general. The economic indicators of this year show that our economic ambitions are real and can become a reality. This is also proved by the successful release of Eurobonds, which was very important for Armenia’s international economic image. This year as of December 31 we will have the highest rate of international reserves in Armenia in the history of the third republic. This is an important result proving our country’s financial stability. This year, based on the data of the first three quarters, the Central Bank has made nearly 433 million USD purchase in Armenia’s market”, the PM said.

Pashinyan highlighted that partnership between the government and the business is needed in Armenia’s economic development process. “Today there is no division between the so-called opposition and pro-government businessmen. We consider all businessmen our number one ally. Our main task is for every businessmen to feel protected in Armenia”, the PM noted.

My Step for Aragatsotn Province investment forum has kicked off today in the village of Sasunik.

The forum is taking place in the Armenia Wine factory.

Nearly 30 business programs, the working atmosphere of the province, its development prospects, priority directions and potential will be introduced during the forum.

The forum aims at assisting the investment programs being implemented in the province, establishing new business ties, revealing the problems in the business sector and developing their solution mechanisms.