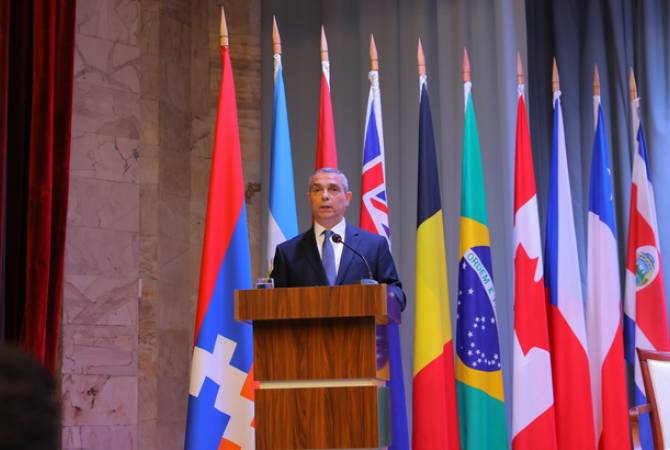 
STEPANAKERT, OCTOBER 11, ARMENPRESS. Minister of Foreign Affairs of Artsakh Masis Mayilian on October 11 delivered a speech on “The International Recognition of the Republic of Artsakh as a Guarantee of Stability and Peace in the Region” at the Friends of Artsakh Forum “Cooperation for the sake of Justice and Peace” taking place in Stepanakert, the Artsakh MFA told Armenpress.

In his speech the Foreign Minister presented the achievements and challenges in the state-building process in Artsakh, as well as the prospects for addressing the existing problems and establishing lasting peace in the South Caucasus region. In his speech, the Minister of Foreign Affairs, in particular, noted that the proclamation of the Republic of Artsakh and the adoption of the Declaration of state independence were in full compliance with international law and the then applicable national legislation. Artsakh had the right to establish an independent state by the realization of its right to self-determination and in accordance with the right to secession as a means of protection in the face of systematic discrimination, mass violations of human rights, and ethnic cleansing carried out by Azerbaijan.

Masis Mayilian noted that for a long time an opinion dominated that the peace agreement with Azerbaijan would pave the way for the international recognition of Artsakh. However, from the very beginning, the peace process faced an insurmountable obstacle - the unwillingness of Azerbaijan to abandon the logic of confrontation, which led to the need to redouble efforts aimed at the international recognition of the Republic of Artsakh.

Masis Mayilian expressed confidence that in the existing situation, the international recognition of Artsakh would ensure the irreversibility of the peace process and would serve as an impetus for the final settlement of the Azerbaijan-Karabakh conflict through negotiations. Moreover, the international recognition of the Republic of Artsakh will allow to apply soft power i.e. political and diplomatic instruments along with hard power and military measures used, to ensure the security.

The Foreign Minister also noted the importance of recognition of Artsakh from the point of the protection of human rights and stressed that the need to reduce the impact of the conflict on the daily life of the citizens of Artsakh is a requirement of the time. In this context, Masis Mayilian underlined that the people of Artsakh should not be infringed in their rights or limited in realizing their potential, only because they live in an unrecognized state.

In his speech, the Foreign Minister expressed gratitude to the Friends of Artsakh for supporting the people of the Republic in their quest for freedom and justice and for promoting the development of Artsakh’s international relations. Masis Mayilian noted that the Forum would be a signal to the international community about the inadmissibility of isolating Artsakh and depriving its citizens of the benefits of international cooperation.