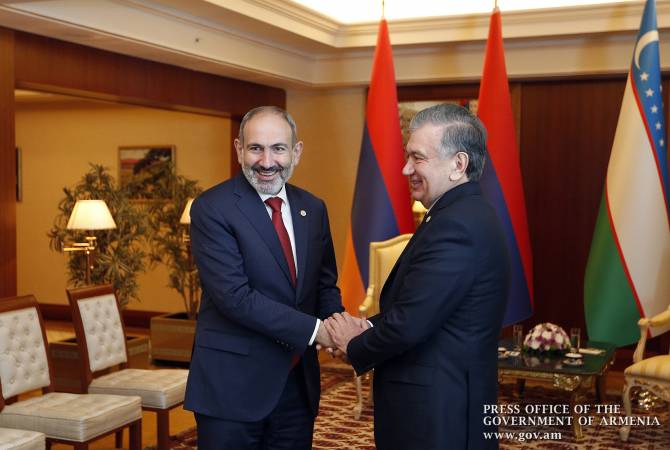 
YEREVAN, OCTOBER 11, ARMENPRESS. Armenian Prime Minister Nikol Pashinyan, who is in Turkmenistan on a working visit, on October 11 met with President of Uzbekistan Shavkat Mirziyoyev in Ashgabat, the PM’s Office told Armenpress.

PM Pashinyan said he is happy to meet with the Uzbek President to discuss the prospects aimed at strengthening the ties between the two states and friendly peoples. Pashinyan expressed the readiness of the Armenian side to contribute to forming a new agenda of the bilateral relations and quickly and effectively implementing it.

In his turn the President of Uzbekistan stated that his country attaches importance to the development of ties with Armenia and this meeting should be used to continue the high-level political dialogue, to fully utilize the existing potential in the bilateral relations and boost the cooperation. In this context the Uzbek President proposed to discuss the possibility to establish an inter-governmental commission.

Armenian PM Pashinyan agreed with this proposal and expressed confidence that the commission will be formed soon and will develop a respective legal framework as a result of effective work. Pashinyan also praised the Uzbek government’s caring attitude towards the Armenian community.

Armenian PM Nikol Pashinyan arrived in Turkmenistan to take part in the session of the CIS Heads of State.