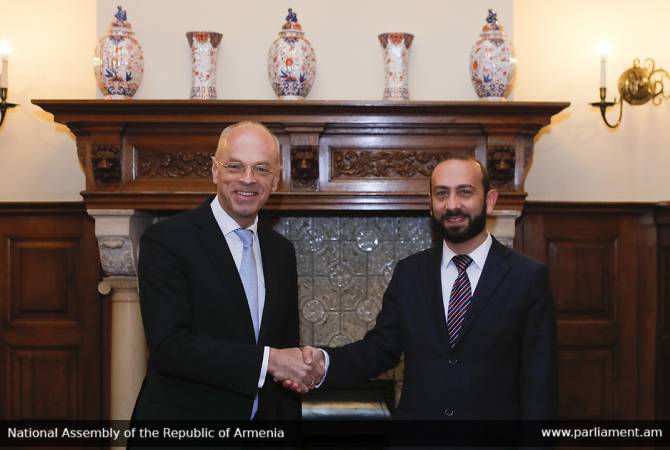 
YEREVAN, OCTOBER 10, ARMENPRESS. On October 10, Speaker of Parliament of Armenia Ararat Mirzoyan had a tête-à-tête talk with President of the Dutch Senate Jan Anthonie Bruijn within the framework of the official visit of the Armenian delegation to the Kingdom of the Netherlands, the Parliament told Armenpress.

During the meeting the Speaker of the Armenian Parliament presented the Velvet revolution happened in Armenia and the developments going on in the country in the period following it and the agenda of the reforms.

The President of the Senate has noted that in the Netherlands they admire the changes that have taken place in Armenia.

During the discussion the parties exchanged ideas over the advancement of the Armenian-Dutch agenda.

Later the delegation led by Ararat Mirzoyan met with the Committee for Foreign Affairs, Defense and Development Cooperation of the Senate of the Netherlands.

At the meeting the ongoing changes, the problems concerning the human rights and migration in Armenia were discussed. The sides touched upon the foreign policy of Armenia, the Artsakh problem and the possible support by the Netherlands to the democratic reforms of Armenia.