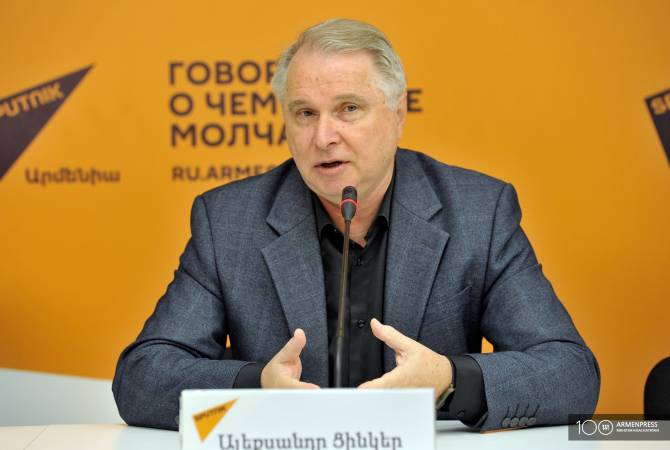 
YEREVAN, OCTOBER 10, ARMENPRESS. Armenia is taking significant steps in the fields of information technologies and cyber-security. In this context Armenia and Israel can have opportunities for cooperation, Dr. Alexander Tzinker, co-chair of the Armenia-Israel international public forum, told reporters today.

“Armenia and Israel can cooperate in different directions. Israel has many achievements in numerous spheres and can share its experience. I noticed that there is a call in Armenia directed to the Diaspora-Armenians to return to their homeland and live here. It’s understandable that this will not happen in a day, a lot of works need to be done for this purpose. Israel has passed this path. It hosted large number of citizens which was a great investment in its economy”, he said.

Alexander Tzinker highlighted the importance of the decision to open an Embassy of Armenia in Israel, stating that it will be possible to intensify the cooperation of the two countries if major works are taken.

“For instance, certain activeness is noticed in the fields of tourism, air transportations. Compared to the past, currently we see that the frequency of weekly flights has increased. There are concrete tour agencies in the two countries which work on transporting tourists in a coordinated way. Armenia has great opportunities in this field. Today I walk around the streets and see that people have changed, I see hope in their eyes. It seems there are no major changes, but there are expectations within the public”, he said.

Mr. Tzinker noted that during these days Armenia has become the center of international events as it hosted the World Congress on Information Technology. He also highlighted the activities of the parliamentary friendship groups.

Alexander Tzinker touched upon the Armenian-Israeli project which supposes establishment of a free economic zone in Gyumri. “Today the world moves on the path of online trade. In this process those who carry out transportation of goods need spaces, hubs where all these goods will be collected and transported to different destinations. As you know, the airport in Gyumri is not so overloaded, and this opportunity can be used taking into account also the Eurasian direction. As far as I know the space has also been provided, but it is not talked about a lot in Israel. I think it would be right to work actively so that the information will spread broadly”, he said.