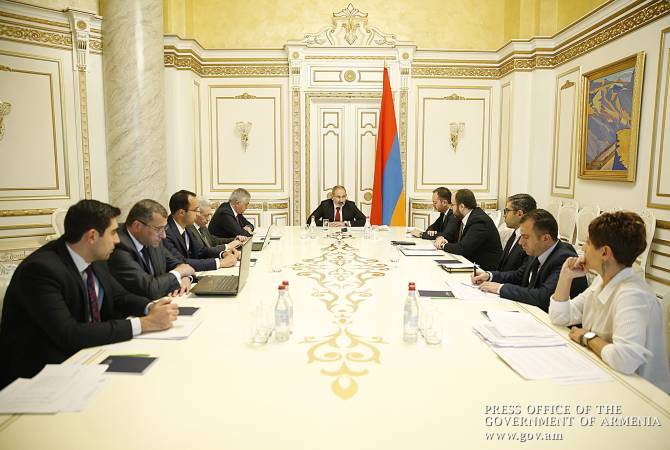 As ARMENPRESS was informed from the Office of the Prime Minister of Armenia, the Premier noted that the discussion should result in a more efficient and better targeted State budget bill for 2020.

“Considering our last year’s experience and the experience of past years, in general, we need to specify our primary task in the budget plan. The biggest challenge is the effective implementation of capital costs. The point is that this year and last year we had a situation several times when the State had money, but there were difficulties with using effective tools in terms of spending this money. This year, unfortunately, we may face the risk of under-fulfillment in terms of spending, but I want to stress that I consider this process to be quite normal. Why? Because budget spending, as we all know, has changed significantly since last year’s political changes. At least, the political authorities and the Armenian leadership consider the principle task to be the efficient spending of budget funds and the elimination of corruption and abuse. And in this regard, we see the need to make institutional decisions so that money is not merely spent, but is translated into political and economic realities that will improve our citizens’ living standards and the quality of economic growth, in general,” Nikol Pashinyan said.

According to the Prime Minister, within the framework of these institutional decisions, specific changes are foreseen, in particular, in the procurement system. “And I want to remind that it is extremely important that ministries and government agencies complete the tendering processes before the new year in parallel with the budget discussions, so that the relevant contracts could have been signed by January 1 in order to move forward with a clear-cut timetable,” the Head of Government said, noting that the next principle is the ability to review quarterly spending data.

“After seeing which of our expenses proved effective, we will have the opportunity to carry out budget redistribution on a quarterly basis. And in those areas where expenditure will turn out to be efficient and progressive, we will perhaps change and increase funding for these areas to ensure that spending is more effective in terms of economic impact,” Prime Minister Pashinyan emphasized.

The 2020 budget allocation for the Ministry of the Environment was the first to be discussed. In this context, the meeting reviewed the relevant departments’ assessments.