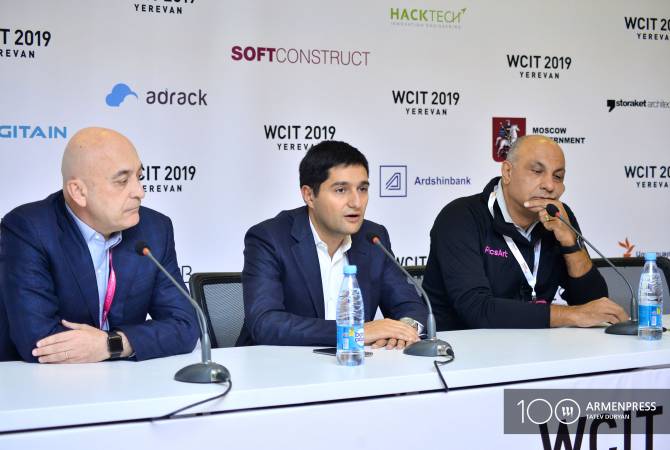 
YEREVAN, OCTOBER 9, ARMENPRESS. The unprecedented number of the participants of WCIT 2019 Armenia, the panels on various topics and the positive reactions already enable President of the Union of Advanced Technology Enterprises (UATE) Alexander Yesayan to record that the Congress was successful.

“I received many reactions starting from yesterday evening, especially from the special guests who arrived in Armenia from abroad. When we were planning this Congress, we expected participation of 2000-2500 people, but today we have over 6000 participants. This figure shows that the agenda was interesting. I think this is already a good result. In addition, we also had discussions with many foreign people on different topics. This is another indicator to state that the event was successful”, the UATE President told reporters today, adding that many conferences have been held in Armenia, but given the scale of this Congress, the participation of the leading international companies, the WCIT was the greatest IT event that has ever taken place in the country.

The UATE President stated that they have carried out major preparation works for this. And their partners PicsArt and the Armenian General Benevolent Union (AGBU) had a great participation in all these processes.

PicsArt co-founder Hovhannes Avoyan shared the view that the WCIT was the greatest IT event held in Armenia. He said the representatives of international companies were impressed with the Armenian IT community.

AGBU Armenia President Vasken Yacoubian noted that they had many reasons for assisting the organization of the Congress in Armenia. Yacoubian said IT is among Armenia’s development priorities, and he personally believes that this Congress was a wonderful platform for that.

The WCIT 2019 organizing committee received numerous calls and messages from the Armenian companies, some of them stated that preliminary cooperation agreements have been reached, and the others in their turn strengthened the already existing cooperation within the frames of the Congress.